Caritas Pakistan Karachi (CPK) under its "WASH Initiatives in Remote Areas of Pakistan" project restored the water supply of Ahsan Raza Goth village in Gadap of Malir district in Karachi.

The village has faced a perennial shortage of water for drinking and cooking as well as for agricultural purposes. CPK is involved with underprivileged communities in Gadap through various interventions in developing communities and creating awareness.

Due to the breakdown of a submersible solar pump — the only source of water for the entire community — the village lacked water. Women and children had to walk for miles to fetch water every day.

“We were in dire straits without water, especially our children and women. Now everyone is happy with the availability of water and there is nothing better than this submersible pump to provide water to our village,” said village head Raza Barfat.

“Caritas was aware of your problem and we have been trying to solve your water problem for a long time but due to lack of resources we were unable to do so. Thanks to God, we were able to help you solve an important problem,” said Mansha Noor, executive secretary of CPK.

Mansha Noor and senior CPK officials Amir Robin and John Rehmat visited Ahsan Raza Goth for the inauguration of the submersible pump and to meet the people of the village.

Robin congratulated the villagers and said the pump would supply water not only for drinking and cooking but also for cattle. He said special care should be taken in the use of the submersible pump.

To commemorate the day and in view of CPK’s “One Million More Trees” campaign, berry trees were planted by the CPK team together with the community. 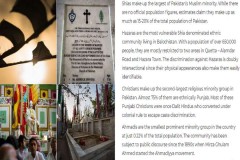