Women's roles are key to disaster planning, management and building a resilient community Speakers and participants at the conference organized by Caritas Pakistan Karachi chapter to observe the International Day for Disaster Risk Reduction in Karachi on Oct. 13. (Photo supplied)

The International Day for Disaster Risk Reduction was observed by the Caritas Pakistan Karachi chapter focusing on the role of women in times of disasters.

John Rehmat, the program coordinator, said women had a vital role to play in disaster response. Real community resilience to disasters may not be achieved without their full participation and contribution in decision-making and leadership, he said.

The community, therefore, needs to recognize the productive and constructive role of women to encourage them to move forward and share their knowledge and experiences in disaster planning and management to build a resilient community, Rehmat added.

The International Day for Disaster Risk Reduction has been observed every Oct. 13 since 1989 after a call by the United Nations General Assembly to promote a global culture of risk awareness and disaster reduction.

This year  Caritas Pakistan Karachi held a conference with the theme “Strengthening Communities Copping Practices to Response Disaster” with the objective of building the capacity of its volunteers, strengthening communities and adopting best practices in response to disasters.

In his opening remarks, Mansha Noor, executive secretary of Caritas Pakistan, said: “We do observe this day with our volunteers to build their capacity and appreciate and recognize their selfless services and contribution for the emergency and humanitarian interventions."

Disasters, many of which are exacerbated by climate change, have a negative impact on investment in sustainable development

Antony Naveed, a Catholic member of the Sindh Assembly who was the chief guest, appreciated Caritas for organizing a disaster management conference for grassroots community workers, especially women, to build their capacities to respond to any disaster in an effective way.

As highlighted by the UN, disasters hit hardest at the local level with the potential to cause loss of life and great social and economic upheaval. The sudden onset of disasters displaces millions of people across the world every year. Disasters, many of which are exacerbated by climate change, have a negative impact on investment in sustainable development and the desired outcomes.

Pakistan is one of the most disaster-prone countries in South Asia. The country has suffered about $18 billion in damages and losses from natural disasters over the past decade, according to a 2017 World Bank report.

The report further said nearly 3 million people are affected by disasters in Pakistan each year with the country prone to natural hazards such as drought, floods, heatwaves, extreme cold, and earthquakes. 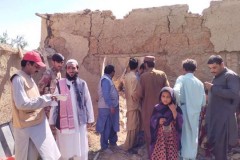 According to the Climate Risk Index 2021, Pakistan ranks eighth for countries most affected by extreme weather events between 2000 and 2019.