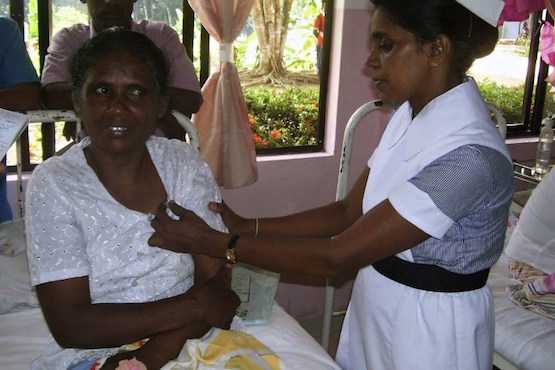 A file image of Sri Lankan migrant worker L.G. Ariyawathi who returned from Saudi Arabia with 24 nails and needles inside her body. Here she talks to a nurse while receiving treatment at a hospital, Aug. 25, 2010. (Photo by AFP)

"Whenever it rained, it was difficult for us to stay in our shelter which was roofed with palm leaves," says Veeriah Lechchami,*  a middle-aged mother of two.

"My sole dream was to build a proper shelter for my family,"Lechchami says.

Wanting to earn money to make her dream a reality, Lechchami left Sri Lanka in 2010 to work as a housemaid in Kuwait.

After working for three months, Lechchami asked for her full payment but her employer refused. After repeated requests for her pay, the employer brutally attacked her and she was knocked unconscious. When Lechchami woke she found that her employer had driven 14 nails into her hand and leg.

Despite her injuries, Lechchami stayed in Kuwait for a further six months. The last three months were spent waiting for her agency to process the required documents that would allow her to return home.

When the Kurunegala branch of Caritas met Lechchami, she was in hospital dealing with the physical affects of the trauma that she experienced in Kuwait.

After providing Lechchami with counseling, Caritas — and well-wishers from abroad — helped her build a house and also provided means for her husband to bring in an income for his family. Six years after being hospitalized, Lechchami still has scars from the abuse she received while working in Kuwait. (Photo by Asanka Fernando)

But Lechchami's well-publicized case is not an isolated one.

More recently, a 45-year-old Sri Lankan maid working in Saudi Arabia was sentenced to death after she was convicted of adultery in August. Later she had her sentence reduced to life imprisonment. The Sri Lankan migrant worker she was found guilty of having an affair with received 100 lashes because he was not married.

In November, a Sri Lankan domestic worker was killed by her Kuwaiti employer's son.

During February, the Sri Lankan government brought back over 100 Sri Lankans who were migrant workers in Saudi Arabia, United Arab Emirates, and Kuwait. Some of them were unable to get their assigned employment while others were victims of harassment or abuse.

Migrant worker, L.H. Jesika sought legal assistance from Caritas Kurunegala last month. She was back in Sri Lanka only for a holiday and was returning to Kuwait where she works as a garment worker.

"When I reached the destination I found out that I have to work in a garment factory which was not promised and I also was getting a much lower wage than what I was expecting," says Jesika.

Not only were the hours long there was no overtime paid.

To assist her with her case, Caritas is dealing with the Kuwait embassy and the Sri Lankan Bureau of Foreign Employment.

"They can be subjected to physical and mental abuses, exploitation, harassment, non-payment of wages and work without rest," says Sanjeewani.

According to official numbers there are approximately 1.7 million Sri Lankans working abroad, the majority of them are women employed as domestic workers and caregivers in the Middle East.

In 2013, 298 migrant workers died abroad and there were 1,741 complaints of physical and sexual harassment. In that same year, Sri Lankan Rizana Nafeek was executed after being found guilty of killing the four-month-old baby of her Saudi Arabian employer. Nafeek was 17-years-old when the child's death occurred.

Nafeek had earlier migrated with the support a job agency that falsified her age. Caritas staff provides a seminar on migration safety in the Sri Lankan city of Kurunegala. (Photo by Asanka Fernando)

Since Nafeek's case, the Sri Lankan Ministry of Foreign Employment has been taking legal action against bogus job agencies.

This month, the government also announced age restrictions for women wanting to work abroad. A minimum age of 25 has been set for Saudi Arabia while for other Middle Eastern countries it is 23. For all other countries outside the Middle East the minimum age is 21.

According to Upul Deshappriya, the spokesperson of the Ministry of Foreign Employment, the ministry has taken further measures to ensure workers' rights, which includes training courses for workers before they leave the country.

*This report has been updated and corrected. Veeriah Lechchami is now correctly identified as the migrant worker who was abused in Kuwait. Previously the article mistakenly identified her as L.G. Ariyawathi who had over 20 nails and needles inserted in her body by an abusive employer in Saudi Arabia, 2010.