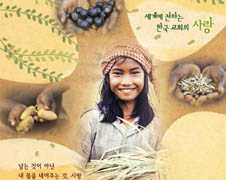 The head of Caritas in Korea has called on local Christians to help poor countries protect their natural resources. “People disregard the environment as a gift from God and exploit it recklessly,” said Bishop Francis Xavier Ahn Myong-ok, president of Caritas Corea. This creates an unbalanced nature that leads to climate change and natural disasters, resulting in suffering, starvation and death, he said Jan. 10 while announcing the Korean Church’s Foreign Aid Sunday that will fall on Jan. 30. He said poverty is closely related to the environment. Reckless environmental destruction and climate change tend to get aggravated in poor countries and affect poor people the most. Around 230,000 people died and 256 million injured from earthquakes, floods, typhoons and volcanic eruptions in 2010, according to Caritas Corea. The Korean Catholic Church celebrates the last Sunday of January as Foreign Aid Sunday and collects fund for its aid overseas. They usually raise about 1.2 billion won (US$1.07 million) on that day, but last year, about US$1.33 million were collected owing to a special appeal to help with relief aid following the earthquake in Haiti. Related report "Development work needed, not relief aid" KO12795.1636