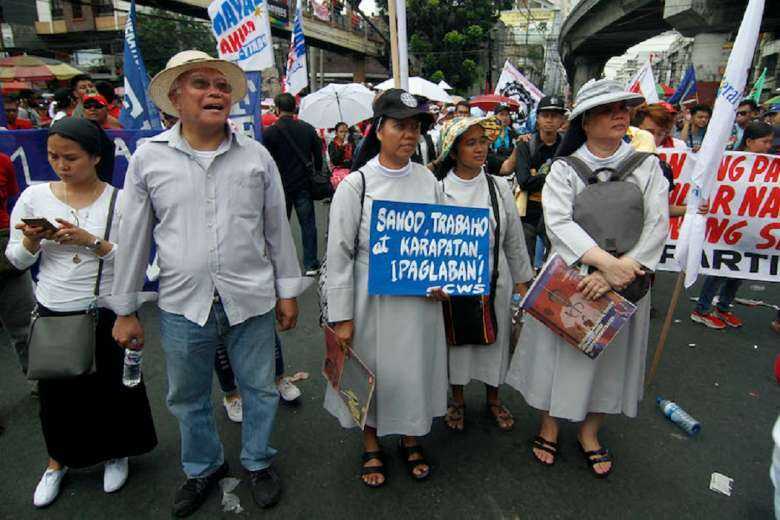 Church people join protest rallies in Manila to call for an end to the six-month contracting of labor in this file photo. (Photo: Vincent Go)

They were referring to the practice of allowing businesses to hire employees on six-month contracts to avoid having to give them benefits normally afforded to regular workers.

Philippine labor law says contractual workers are not entitled to privileges such as paid leave and bonuses if they are not regular employees — those working for an employer for more than six months.

“We are extremely disappointed he has reneged on his promise to end contractualization. [It seems] ending it is not one of his priorities anymore,” Bishop Bagaforo told Radio Veritas on July 12.

As a result, Duterte has caused suffering not only to workers but also to their families severely affected by the pandemic, he said.

We are tired of Duterte’s ‘kill, kill, kill’ language and cursing. We are not slaves or subjects of a notorious criminal king

“This unfair policy has worsened the country’s labor situation evidenced by an all-time high unemployment at 7.7 percent or 3.73 million Filipino workers without jobs,” the bishop added.

NAGKAISA, the country’s largest labor coalition, likewise urged Duterte to address “major” labor concerns instead of focusing on his political future after his single term ends next year.

“We are calling the public, in the name of all labor unions and federations, to put an end to the kingship of President Duterte in 2022. The call to end the contract policy is now the same as calling for the end of Duterte’s rule. Enough is enough,” NAGKAISA spokesman Sonny Matula said in a press statement on July 12.

“Labor groups believe that Duterte has no right to seek public office again because of his dismal performance as president seen by his abuse of workers’ rights and very poor pandemic response.

“We are convinced Duterte has committed many crimes. We are tired of Duterte’s ‘kill, kill, kill’ language and cursing. We are not slaves or subjects of a notorious criminal king. We deserve respect as humans and as workers from our leaders.”

The labor group reiterated its call for the end to contractualization.

“[It] is anti-poor. One cannot claim he or she is a good Catholic if he or she exploits the dignity of the human person through labor. Labor has dignity because man has dignity,” Quezon City parishioner Anabelle Prodigalidad told UCA News.

“There is no dichotomy. If we want to be good Christians, then we must be good employers and employees,” she said.