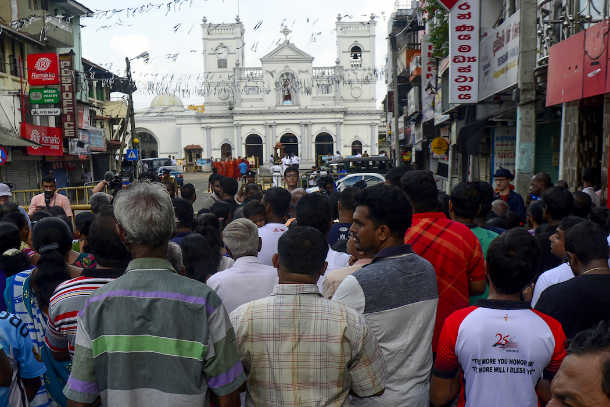 Devotees pray at a barricade near St. Anthony's Shrine in Colombo on April 28, a week after a series of bomb blasts targeting churches and luxury hotels on Easter Sunday in Sri Lanka. The shrine was destroyed in the attacks. (Photo by Jewel Samad/AFP)

Wracked with survivor's guilt and heartbroken after losing his wife in the Easter bombing attacks that devastated Sri Lanka on April 21, M.N. Jacob Fernando said he came close to giving up on life.

He couldn't bear to look his surviving children in the face and struggled to keep going after that fateful day at Katuwapitiya Church.

Another bereaved relative who lost a brother in the bombing at St. Anthony's Shrine in Kochchikade said he was stumbling around dumbfounded before Caritas Colombo (also known as Caritas Sethsarana), a local branch of the Catholic Church's charity arm, stepped in to help.

"When I arrived at the mortuary to receive my brother's body, I didn't have a clue what to do or how to deal with it," said Joseph Jesudhasan, a villager from Jaffna.

In both cases, priests and nuns from Caritas provided counseling services and financial support to help these and other victims' families in their darkest hours.

Caritas also promised Fernando it would find his family a permanent home to replace their ramshackle wooden abode.

The agency, working in partnership with the Family Apostolate, the Conference of Major Religious Superiors and the Pontifical Mission Societies, has launched a holistic program called "Psychosocial and Pastoral Supportive Program" to help rebuild people's broken lives.

He said Caritas would bear all the expenses for victims' medical treatment.

Jesudhasan said he would have been lost but for the agency's support. "I felt helpless when the funeral directors said I needed to hire a vehicle to take my brother's body back to Jaffna, which is about 400 kilometers from Colombo, because I couldn't afford it," he said.

"Caritas not only helped me through that very difficult time. They also paid the transportation costs."

His brother had been working in the Sri Lankan capital for a while before he died. He regularly attended Sunday Mass at the shrine and sent money home each month to support the family, Jesudhasan said.

Caritas officials rushed to hospitals in Colombo and Negombo to console the bereaved and record their details to inform parish priests so that they could receive further support.

"I was inspired by what I saw Caritas doing," said a Buddhist policeman who was on duty at one of the hospitals. He declined to give his name.

"They were right there with the families, helping them to identify the bodies, and they stayed with them until all the necessary arrangements had been made."

One of the teenagers who survived a church attack watched both his parents die. His leg was badly injured and he now has trouble sleeping. Caritas counselors, who visit him daily, say he can't be left alone.

Meanwhile, the house of Cardinal Malcolm Ranjith has become a high-security zone, with the prelate warned against appearing in public as more attacks are feared. Despite the warnings, he was seen last Sunday meeting and blessing victims in hospitals.

Other churches have canceled Masses, among other measures.

President Maithripala Sirisena has assured citizens and tourists alike that the security situation in Sri Lanka is now under control, but Cardinal Ranjith has expressed his dissatisfaction with such guarantees.

"We have identified those who have been heavily traumatized and counseling by professionals is underway," said Father Claude Nonis, who is in charge of these church-run operations.

Members of his group met with those who witnessed the attacks and they visit those who remain deeply affected on a daily basis, he said.

St. Anthony's Shrine was damaged but reopened under beefed-up security on May 7 for a day of veneration dedicated to its patron saint, St. Anthony of Padua.

The shrine administrator said the church will now be open to devotees daily from 7 a.m. to 8 p.m.

Caritas Sethsarana is offering medical, educational and legal support to those affected by the attacks. It is also helping them find work and rebuild their homes.

The Venerable Baddegama Samitha Thera and 49 monks from Galle visited St. Sebastian's Church in Katuwapitiya on May 8 to help clean it up and show their fraternity, which has brought Buddhists and Catholics closer together.

Caritas relies on contributions to keep supporting victims. Any donations would be gratefully received by Commercial Bank at account number 1190036535. The account name is Sethsarana; Swift code CCEYLKLX