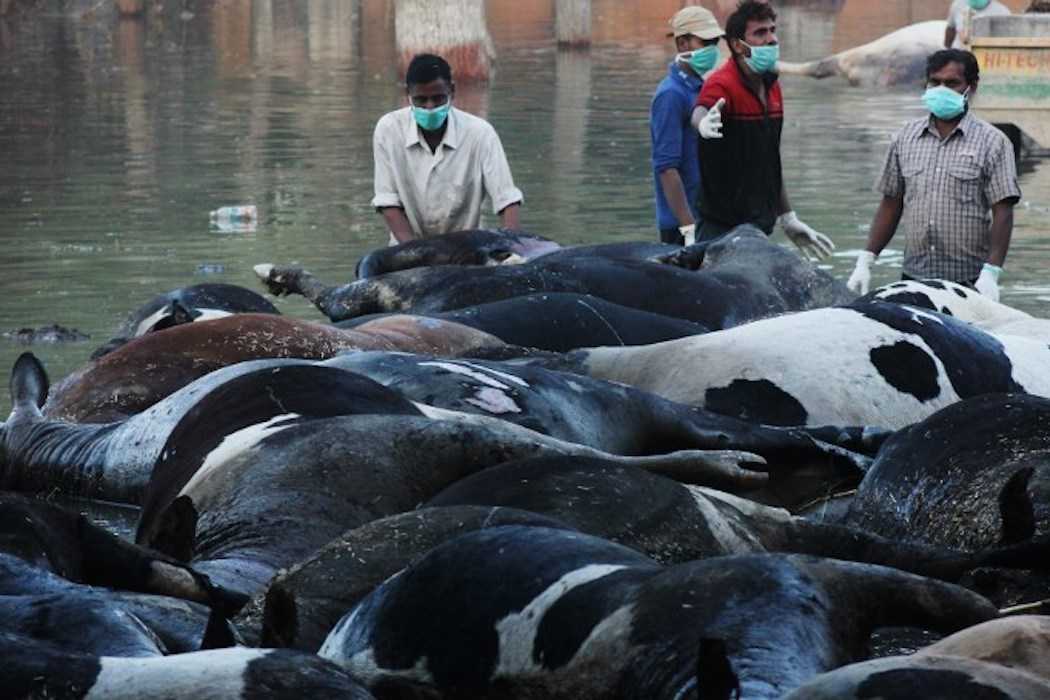 Employees from Srinagar Municipality move the bodies of cattle killed in the 2014 floods in the north Indian region. Rice farmers were not the only ones devastated by the freak weather that year, but now Caritas India is helping local agriculturalists get back on their feet. (Photo by Shahid Tantray/AFP)

Kashmiri farmer Ghulam Nabi Tantary remembers vividly how the floods of 2014 literally washed away his dreams of marrying off his daughter while leaving him financially crippled with almost nowhere to turn.

The 71-year-old told ucanews.com that he was banking on that year's harvest to pay her dowry, a common custom in India, before devastating thunderstorms in September put a dampener on their dreams.

"My house, my land and my cattle were all washed away. The real misery began when the waters receded and we assessed the damage," said Tantary, an apple grower by profession who has already felt the impact of climate change and who lives in Pulwama district of Kashmir, a state rife with militant unrest.

"I cried for days as the dream of seeing my daughter married evaporated," he said, adding he had been scraping money together for a decade for the dowry but it was still nowhere near enough.

In a bid to mitigate the suffering of farmers like Tantary, Caritas India, the Catholic Church's social service wing, has come up with a project this year to boost their income so they can avoid penury next time disaster strikes.

The project aims to instil confidence in the farming community, many of whom live in abject fear of seeing their livelihoods destroyed by freak weather conditions that are not uncommon in this part of the world.

"We help farmers receive training from scientists at local agricultural universities. They give them tips and information on how to increase their profits without having to endure further hardship," said Altaf Hussain Lone, a program coordinator for the local branch of Caritas.

He said the goal is to make them self-reliant through more sustainable farming. Horticulturists like Tantary are also benefiting from the project.

The Church group's training has "introduced me to newer and better varieties of apples," Tantary said.

Farmers make up 80 percent of Kashmir's 12.5-million population and agriculture and horticulture are considered the backbone of its economy.

Lone said farmers that engage in its latest project are sent to local campuses to receive special training, such as how to grow different varieties of apples in a way that produces richer yields.

"We hope to help mitigate their losses from the 2014 floods and help equip them with the latest knowledge and technology for better harvests," said Basharat Ahmad, a volunteer attached to the project.

According to research by Sphere India, a coalition of government and other agencies, the floods in 2014 struck this North Indian region at the worst possible time: just ahead of the rice and apple harvest.

The study found some 7,000 hectares of land were completely destroyed, with Anantnag, Kulgam and Tantary's village of Pulwama in south Kashmir bearing the brunt.

Mohammad Yusuf Dar, who grows rice crops in the Malagpora area not far from Tantary's village, said the farmers there were reluctant to sow crops again after those fateful five days of incessant rain.

"We kept wondering when it would happen again and ruin us even more," he said.

Most of the region's farmers were only able to cultivate rice crops but Caritas has been broadening their knowledge and skill base so that they can diversify to improve their chances of success, it said.

One focus is enlightening them about the benefits of investing in short-term crops like vegetables, Long said.

According to state government estimates, Kashmir's agricultural sector incurred losses amounting to 37 billion rupees ($570 million) in 2014 when 30,000 hectares of paddy was damaged.