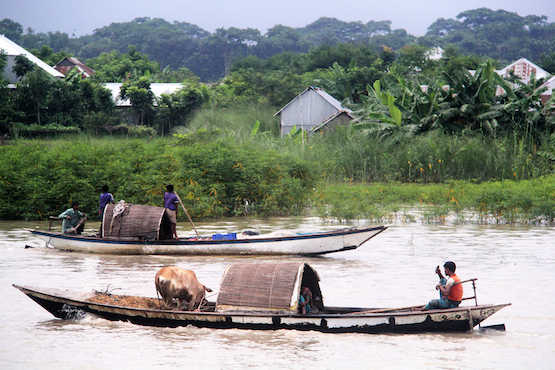 A flooded village in Munshiganj district of Bangladesh. Ongoing flooding has submerged thousands of houses and left about 1.7 million people in 16 districts of the country. (ucanews.com photo by Stephan Uttom)

Caritas will join with Bangladeshi authorities to offer emergency aid to victims of a flood that has left about 1.7 million people stranded.

The floods, triggered by monsoon rain and a rush of water from neighboring upstream India, has submerged 16 districts in the north and northeast of the country.

Caritas is monitoring the situation and preparing for the distribution of emergency aid, said Swapan Rozario, program manager at Caritas Dinajpur regional office, which covers nine districts in the north.

"As per our estimate, 1.7 million people have been flood-affected," said Rozario. "We are monitoring the situation regularly and sending reports to our Disaster Management department."

Rozario said their office had yet to get funds from Caritas central office and international donors, but were making efforts to offer minimal aid to victims from their own resources.

"We will distribute two kilograms of rice and lentils and some dry food to 250 families as well as some oral saline packets and water purification tablets within a day or two," said Rozario. "Once we get funds, we will offer more aid and also assistance for the rehabilitation and rebuilding of lives."

"There is also the possibility of river erosion and the outbreak of water-borne diseases when the floodwater recedes," he said. "The authorities need to remain vigilant to tackle the critical aftermath situation."

All major rivers including Padma, Jamuna and Brahmaputra are swollen beyond the danger level, according to the state-run, Flood Forecasting and Warning Center.

The flooding has reportedly devastated thousands of houses, destroyed tens of thousands of hectares of crops and fishery stocks. In several districts road and rail links have been severed.

About 15 people have died while tens of thousands are suffering from acute food and water shortages as no aid has reached them yet, local media reports. A family in Bangladesh stranded as flood waters surround their house in this file photo.  Much of the country is just a few meters above sea level, making it prone to cyclones and floods. (ucanews.com photo)

Emergency flood relief is being distributed in all affected areas, says Reaz Ahmed, director-general of the state-run, Department of Disaster Management.

"Eight thousand tons of rice, dry food worth 20.5 million taka [US$ 320,513] and 30 million taka in cash handouts has been distributed among flood-affected people. We will offer more aid as necessary," Ahmed told ucanews.com.

Ahmed said there is a possibility of flooding in the capital Dhaka and adjacent areas but the government is prepared to tackle it.

"Close to 50,000 families have been marooned by flooding and about 800 families by river erosion," he said. "We have distributed 696 tons of rice, 2,750 packets of dry food and 900,000 taka in cash handouts but people are suffering as floodwater has not receded."

In Nilphamari, another northern district, the authorities have evacuated 10,000 families to flood shelters and are handing out aid, according to Zakir Hossain, deputy commissioner of the district.

"We have offered aid and ensured sanitation and deployed medical teams for necessary health services," said Hossain. "Floodwater has started to recede but we are not sure it’s going to be over soon."

"People are still residing in shelters in the hinterlands," he said. We don’t know what will happen in the coming days, but we are prepared to face a prolonged flood situation."

Bangladesh is located in the world’s largest delta system which is crisscrossed by 300 rivers. Much of the country is just a few meters above sea level, making it prone to cyclones and floods. 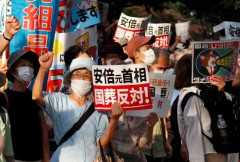