The head of the Catholic Church’s social arm in the Philippines called for “justice and accountability” on Aug. 13 following allegations of widespread corruption by high-ranking government officials involved with the country’s universal health coverage scheme.

It is alleged government figures were involved in defrauding the Philippine Health Insurance Corporation (PhilHealth) out of billions of pesos.

The head of Caritas, Bishop Jose Colin Bagaforo of Kidapawan, said the scheme was riddled with corruption because government officials were selfish enough to think that they “could always get away with it.”

Bishop Bagaforo was referring to alleged fraud in PhilHealth involving the delaying of salaries and overpriced budget proposals for information and communication technology projects.

Whistleblower and PhilHealth employee Thorsson Montes Keith revealed on Aug. 4 that a “mafia” had stolen 15 billion pesos (US$300 million) from a PhilHealth fund allotted for care for the poor during the coronavirus pandemic.

He also claimed PhilHealth’s funds would run out by 2022 as a result of the anomalies and decreased collections and higher payouts due to Covid-19 hospitalization bills.

“We expect that by 2021 we will already be in the red already, so it’s only one year … in terms of actuarial life,” said Keith in a statement.

Bishop Bagaforo said officials facing investigation in connection with the scandal must be suspended.

“We are in solidarity with all sectors in calling for the suspension of these officials to give way to an independent investigation of the graft allegations,” Bishop Bagaforo said. 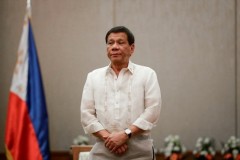 He called on government authorities “to uncover the truth, serve justice and make everyone involved accountable.”

“The public cannot always be at the receiving end of corruption in the government. It is utterly devastating that cases of this scale and magnitude can prevail in public offices where accountability should have been the primary measure of moral aptitude,” Bishop Bagaforo said.

Lawmakers have proposed PhilHealth suspend operations pending an investigation and also called for the immediate suspension of officials involved.

“The current allocation system is a complete disaster and is a huge stumbling block for our hospitals to be able to effectively address the killer pandemic,” lawmaker Francis “Kiko” Pangilinan said in an interview.

Another lawmaker, Panfilo Lacson, questioned the way the agency allocated funds, particularly in choosing which hospitals it would subsidize.

Bishop Bagaforo said any investigation must start at the top of PhilHealth, namely the health secretary.

“The investigation must not favor anyone starting from top leadership down to the last employee of PhilHealth. It must be fair and square,” Bishop Bagaforo told UCA News.

Presidential spokesperson Harry Roque said on Aug 6 that President Rodrigo Duterte had ordered a team to investigate the allegations and instructed it to gather evidence of corruption.