More than 20 injured after water cannon, tear gas used to break up demonstration 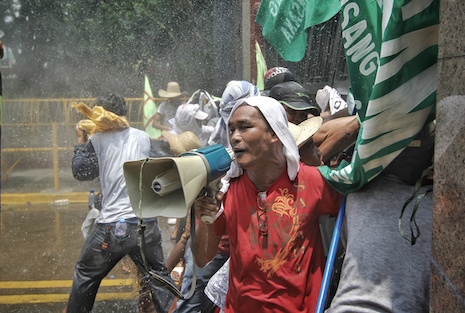 The social action arm of the Catholic Bishops' Conference of the Philippines on Wednesday condemned the "inhumane" dispersal of a protest on Tuesday, which resulted in 21 farmers being injured.

"These poor farmers were unarmed. They are not animals and definitely not criminals. They were only here to demand for what is due to them under the agrarian reform law," said Fr Edwin Gariguez, executive secretary of Caritas Philippines.

Police and security personnel at the House of Representatives used tear gas, pepper spray and water cannons to disperse farmers who were calling on legislators to pass a law that would extend the coverage of the country's agrarian reform law.

The farmers have filed a formal complaint against the security personnel of the House of Representatives with the Commission on Human Rights. They complained of varying degrees of skin rashes and itchiness, burning sensation, dizziness, nausea and vomiting, shortness of breath, and coughing.

The farmers, who came from different parts of the country, were protesting the efforts of some legislators "to dilute the social justice goals of the agrarian reform program". Gariguez said security officers at Congress "employed a violent method to disperse the farmers". The priest said it only shows that "the country's agrarian reform law is yet to become successful in empowering landless tillers".

Representative Teddy Brawner Baguilat, chairman of the Committee on Agrarian Reform in the House of Representatives, denounced the "violence inflicted on the farmers who only came to assert their rights and ask for what is due to them".

"House security should have exercised more than maximum tolerance in favor of these poor farmers. I understand the high tempers of farmers on top of the sweltering heat, as their rights to land are being threatened," said Baguilat.

The farmers' protest was part of a 17-day peasant march to press for the immediate passage of a law that will ensure the completion of the government’s land-to-the-tiller program, food security and broad-based economic development.

They have been calling on President Benigno Aquino’s administration to implement asset reform by overhauling the implementation of the agrarian reform law and completing the distribution to peasants of all agricultural landholdings subject to the program.

In a statement, the peasant organization Task Force Mapalad said the farmers' interests are "being threatened by landlord-politicians’ attempt to continue their control over all remaining agricultural lands that should have long been distributed to beneficiaries".

The House of Representative is scheduled next month to pass a law that will create an independent Agrarian Reform Commission to review the actual accomplishment of the agrarian reform law and investigate circumventions and violations.

More than 700,000 hectares of agricultural landholdings nationwide have not yet been awarded to farmer-beneficiaries of the law.

Data from the Department of Agrarian Reform show that as of April 15, 2015, some 15,391 landholdings nationwide with a total area of 164,156 hectares have not yet been issued notices of coverage (NOC), the first of the many steps in acquiring and distributing lands to farmer-beneficiaries of the program.