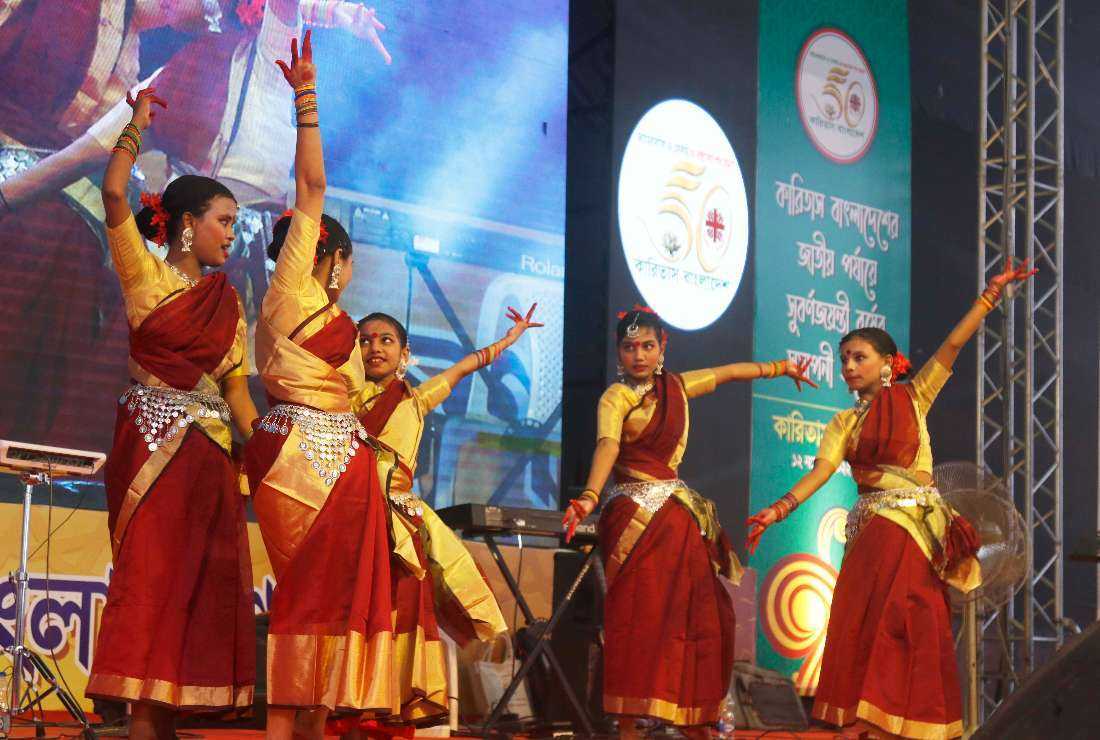 Caritas Bangladesh has been urged to continue its vital role in the integral development of the marginalized communities in the Muslim-majority South Asian nation as it closed its year-long golden jubilee celebrations.

“The role of Caritas is precisely that of a Good Samaritan, who sees the needs of others and selflessly takes interest in them, and compassionately assists them,” said Monsignor Marinko Antolovic, charge de affairs of the Vatican's embassy in Bangladesh.

“Caritas uplifts the lives of ordinary people — people affected by disasters, people in distress, and people suffering, and it brings hope into their lives,” he said.

Monsignor Antolovic was speaking during the national-level closing program of the jubilee celebrations in the capital Dhaka on Nov. 12. The event was themed “Caritas Bangladesh: 50 Years Journey of Love and Service.”

He said that Pope Francis has sent special greetings as he was “interested in the services of Caritas Bangladesh.”

“He was particularly moved by Caritas’ vital role in welcoming, protecting, and assisting Rohingya refugees since the very beginning of the tragic events back in 2017,” he said, adding that the Holy Father wishes that Caritas continue the good work with even more zeal, solidarity, and charity.

“He encourages you to be self-giving, open for others and constantly be at the service of people living on the margins of society.”

Daylong programs featured a colorful parade, the releasing of balloons and pigeons, exhibition stalls by Caritas regional offices and trusts, the handing out of Caritas awards, a video documentary on Caritas activities, the presentation of research reports and a cultural show.

Razzak, the chief guest, commended Caritas for its role in socio-economic development since Bangladesh gained independence in 1971.

“When Bangladesh emerged, many experts predicted that it won’t be able to survive as an independent nation because of endemic poverty and will always depend on foreign aid. Bangladesh was called a ‘bottomless basket case.’ But we have proved them all wrong,” the minister said.

“Today, we have reduced poverty to 20 percent from 56 percent and our dependency on foreign aid has dropped from 20 percent to only 2 percent today. Besides the government, development agencies like Caritas have played an amazing role,” he added.

Caritas executive director Sebastian Rozario said that in the past 50 years Caritas has supported about 45 million people in humanitarian assistance to socio-economic development.

Rozario said Caritas is currently running 112 projects and 3 trust bodies serving 1.6 million people in 53 out of 64 districts of Bangladesh.

“Our services for the poorest of the poor and people on the margins will continue,” he said.

Richard Sloman, a representative from CAFOD, the official aid agency of the Catholic Church in England and Wales, said the organization is proud to have been a development partner of Caritas Bangladesh since 1986.

“Caritas Bangladesh has given love and hope to millions of people all over the country. From people who are displaced by flooding and cyclone to poor farmers, women, and children living in slums or refugees living Cox’s Bazar,” Sloman said.

Beneficiaries say Caritas interventions have made a difference in their life.

Nimai Talukder, 58, a Hindu from Rangunia in Chittagong, was a low-income day laborer until 2000 and struggled to care for his family. He became a member of a Caritas organic farming project and learned vegetable and fish cultivation as well as techniques to make compost fertilizer using earthworms.

“Once I was unable to fulfill the basic needs of my family. That's now a thing of the past. I have attained success by working hard with my wife and my children in agriculture. I am grateful to Caritas for the support,” he said.

The eastern branch of Caritas Pakistan started in 1967 when Bangladesh was still part of Pakistan.

Shortly before Bangladesh’s independence following a bloody civil war in 1971, CORR became a national organization. It became a registered voluntary organization in 1972. It was later renamed Caritas Bangladesh.

Caritas has a national office in the capital Dhaka and eight regional offices based in eight Catholic dioceses in Bangladesh.