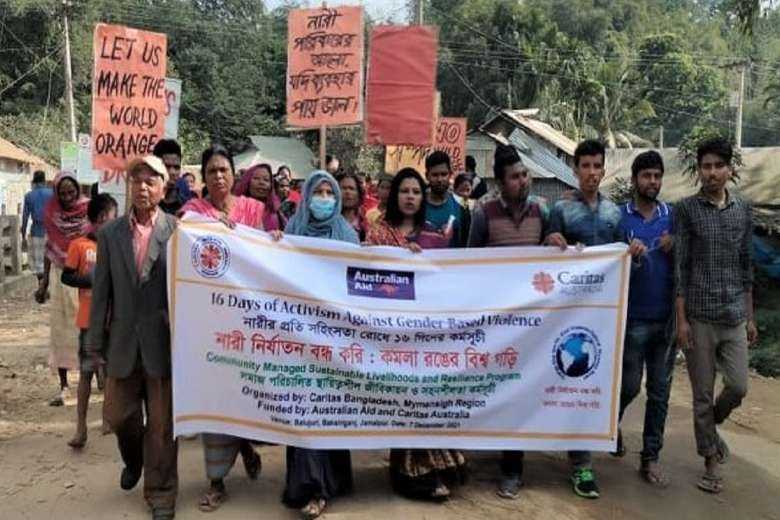 Caritas Bangladesh is calling for an end to violence against women. (Photo supplied)

Caritas Bangladesh recently took part in UNiTE to End Violence against Women, a multi-year awareness campaign by the UN aimed at preventing and eliminating violence against women and girls.

The global campaign against gender-based violence, which commenced on Nov. 25 and runs until Dec. 10, was observed through various activities.

Caritas Bangladesh, which operates in 206 out of 495 subdistricts of the country, conducted a 16-day campaign seeking to end violence against women in each of the working areas.

Caritas Bangladesh launched the daily awareness campaign by praying for an end to violence against women, praying for the recovery of those who have been abused and wishing peace for the souls of the victims.

The church-run social development organization also implemented a campaign to end violence against women through human chains, seminars and discussions with men, women, girls and all stakeholders including government officials.

I think women in Bangladesh are still not considered as human beings; they are seen as commodities

“I think women in Bangladesh are still not considered as human beings; they are seen as commodities. And for centuries this mentality has been responsible for violence against women,” Rongma told UCA News.

She said violence against women in Bangladesh cannot be stopped unless the laws are properly implemented and moral values ​​are developed and Caritas is working towards that goal.

Women’s rights activists say that women are still subject to various forms of discrimination, oppression and physical, mental and economic violence at the family, society and national levels.

According to Dhaka-based rights organization Ain O Salish Kendra (Law and Arbitration Center), in the first 10 months of 2021, 197 women were killed by their husbands as a result of domestic violence, of which 128 women committed suicide.

In addition, the rights organization revealed that during this period 1,178 women were raped of which 220 were victims of gang-rape, 43 murdered after rape, 276 were victims of attempted rape and eight committed suicide after being raped.

Sulekha Khatun, 20, who joined the Caritas campaign in Shyamnagar sub-district of Satkhira on Dec. 2, told UCA News that "we girls feel helpless so men dare to torture us."

“We get courage when we come to these programs run by Caritas, we get the strength to respond when someone insults us in the streets, and I think every woman should have this courage,” Khatun added.