Program commences with 1,500 farmers in one district 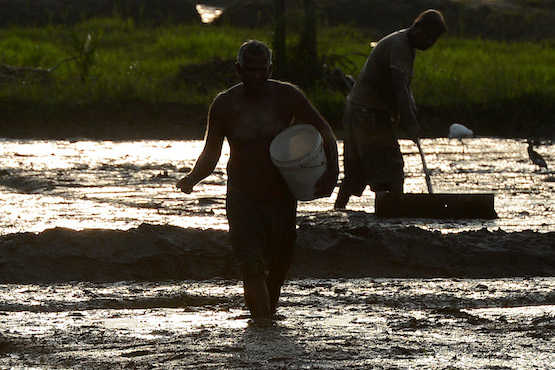 Sri Lankan farmers work in a paddy field on the outskirts of Colombo, in this file photo. (Photo by AFP)

Caritas is helping Sri Lankan farmers reduce their use of dangerous chemicals by turning to organic farming.

The assistance in northern Anuradhapura district is part of a countrywide food security project.

W.D. Upulshantha said he and other farmers could produce more varied crops and share surpluses with neighbors by using organic growing techniques.

One method uses bags filled with soil to grow crops, allowing plants to be moved in response to excessive rainfall or dry weather.

The program has commenced with 1,500 farmers in Anuradhapura district.

It is hoped that thousands more farmers will join in from the districts of Kurunegala, Batticaloa and Polonnaruwa.

There are plans to include, over five years, organic tropical fruits and local rice varieties.

Sri Lanka has been adversely affected in recent decades by toxic chemical residues in food.

Eighty billion rupees worth of agro-chemicals are imported into Sri Lanka annually.

Elevated levels of chronic kidney disease have been recorded among farmers using chemicals, including insecticides.

The World Health Organization reports that more than 15 percent of the population aged 15-70 years in several provinces has suffered from kidney disease.

Thousands of people have been hospitalized and about 300 deaths recorded each year due to kidney damage from agricultural chemicals.

As well as the quantity of food being adequate, it was important to improve the quality.

Use of organic methods by small-scale farmers would help achieve this goal.