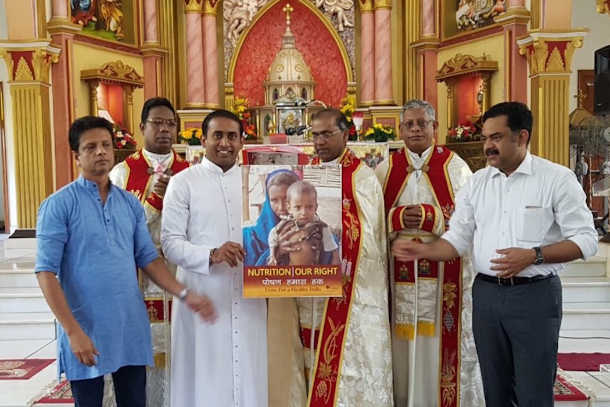 Father Paul Moonjely, executive director of Caritas India (center-right) and his assistant Father Jolly Puthenpura (right) join other priests and laypersons at Our Lady of Fatima Forane Church in Faridabad Diocese to unveil the official poster of the Caritas anti-hunger campaign. Caritas India is collaborating with the government to end malnutrition. (Photo courtesy of Caritas India)

A Lent campaign spearheaded by Caritas India is fighting chronic malnutrition in the country.

The Catholic charity launched its nationwide campaign for this year’s Lent, a seven-week period culminating in Easter Sunday on April 21, with the theme “Nutrition our right — Unite for a healthy India.”

“It is an effort of solidarity during the Lenten season that the Church reaches out to those on the fringes,” especially children of the socially poor Dalit, tribal and marginalized people, said Father Jolly Puthenpura, assistant executive director of Caritas India.

India is home to the largest number of the world’s undernourished children — 195 million. The State of Food Security and Nutrition in the World 2018 report says a whopping 47 million are stunted while 25.5 million are underweight.

Father Puthenpura said India produces more than enough food grains to feed its 1.3 billion people. But malnutrition continues to cripple the country by weakening children’s immunity and increasing mortality rates. Poverty and unequal distribution of wealth are the main reasons, he said.

The campaign aims to spread awareness of malnutrition through various programs, including posters, talks and walks, so as to gain people’s support to fight the problem, said Father Paul Moonjely, executive director of Caritas India.

“Caritas India works with local governments and acts as a bridge between the state and people. We also complement these programs with our own interventions,” he said.

“Caritas India has been given the mandate to campaign against hunger and disease, and we involve the diocese and the faithful in taking the mission forward.”

Caritas India chief Father Paul Moonjely takes a solidarity walk with staff, volunteers and parishioners as part of the launch of the campaign at Our Lady of Fatima Church in Faridabad Diocest on March 17. (Photo courtesy of Caritas India)

The campaign is being held in 100 places in various states. Next year it will be held in every district where there is a diocese, the Caritas India chief said.

The southern state of Kerala is spreading the message through street plays, said Jenny Joy, Caritas officer for resource mobilization and development.

On March 24, the program was launched in Delhi Archdiocese with a blood donation camp organized jointly with Chetanalaya, the diocesan social service agency, St. John’s Ambulance Service and the Indian Red Cross Society at the Sacred Heart Cathedral in the capital.

“As the Lent season symbolizes the need to give, people donated their precious blood to save lives,” said Father John Britto, who directs Chetanalaya.

He said his agency helps Caritas in its field study of malnutrition with the help of medical experts in 17 slum areas in the capital and in neighboring states.

The collaboration of voluntary agencies like Caritas India is important in fighting malnutrition, said Alok Kumar, adviser to Niti Aayog, the planning division of the federal government.

“We need to come together to spread awareness about nutrition issues and induce behavioural change in every household,” Kumar told ucanews.com

It aims to make India a malnutrition-free nation by 2022, the 75th year of the country's independence.