Some analysts predict 'white smoke' before the end of the week 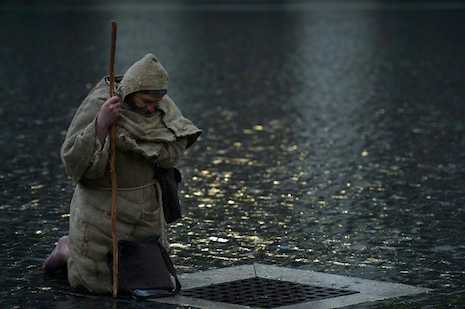 A man kneels in prayer in St. Peter's Square as the conclave began on Tuesday (AFP photo/Gabriel Bouys)

With the order of “Extra Omnes” (Latin for “Everybody out”) pronounced by the Master of Papal Ceremonies, monsignor Guido Marini, the conclave that will select the pope to succeed Benedict XVI officially started in Rome on Tuesday.

At 4:30pm in Rome, cardinals filed into the Vatican's Sistine Chapel as they sang hymns and invoked the names of the saints.

Under the imposing presence of Michelangelo's “Last Judgment,” they took a solemn oath of secrecy – they will live cut off from the world within the Vatican until a two-thirds majority among them reaches a consensus and a new pope is elected.

Outside in St. Peter's Square, under pouring rain and hail, a crowd of a few hundred people watched the rite live from large screens, while the more than 5,000 journalists who have flocked to Rome to cover the conclave crowded the terraces of the neighboring palaces, where broadcast media from all over the world have set up their headquarters.

Earlier this morning, during a mass “for the election of the Roman Pontiff” in St. Peter's Basilica, the Catholic Church's most senior cleric, Cardinal Angelo Sodano, called cardinals to work together for the “unity of the church.”

His words came after the Italian press reported for days about contrasts among the cardinals as they discussed behind closed doors about the profile of the future pope and the challenges facing the church.

Church tradition dictates that discussions take place mostly before the conclave, while inside the Sistine Chapel cardinals devote themselves exclusively to praying and voting.

On the side, conversations can still happen over meals in the Santa Marta complex where prelates will be secluded until the voting concludes.

Sodano, who is the dean of the College of Cardinals, will not participate in the conclave, as he is 85 and thus above the cardinals' retirement age of 80.

The Mass's homily usually sets the tone for the upcoming conclave, as it happened in 2005 when Cardinal Ratzinger called the church to reject modern “ideological currents” that threatened its millennia-old doctrines.

His homily is widely considered to have sealed the success John Paul II's former doctrinal chief’s candidacy to the papacy.

Before voting starts later tonight in the Sistine Chapel, the 115 cardinal-electors will hear retired Maltese cardinal Prosper Grech deliver a meditation on the “grave duty incumbent on them and thus on the need to act with right intention for the good of the Universal Church, solum Deum prae oculis habentes”, meaning “having only God before their eyes” in Latin.

Cardinals will probably hold their first ballot tonight, though Vatican spokesman father Federico Lombardi warned that it probably “won't have a positive result,” meaning that it won't lead to the election of a pope.