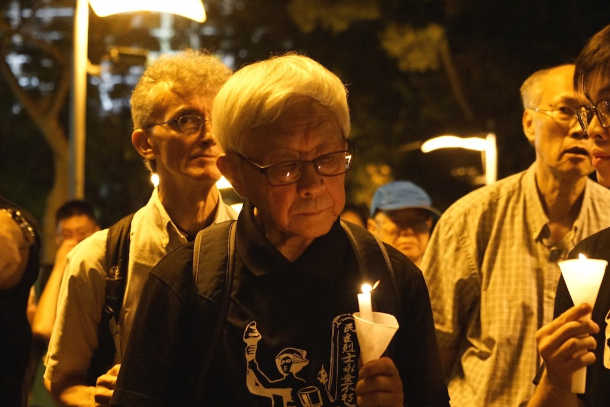 A church leader in Hong Kong has urged people to continue the struggle against Chinese communist repression as thousands defied the city administration's ban on remembering victims of the 1989 Tiananmen Square massacre.

Cardinal Joseph Zen, an outspoken critic of the Chinese Communist Party (CCP) and former bishop of Hong Kong, said the anniversary should inspire others "to pick up the flags" that fell from the victims in Tiananmen Square. Some churches in Hong Kong marked the June 4 anniversary with Masses and prayers remembering the young people who were killed in Beijing when China crushed the 1989 student-led pro-democracy movement.

The annual commemoration and "prayer on this day is not only to mourn the deceased or comfort their loved ones" but also "to remind ourselves that we should pick up the flags left by the martyrs … and carry on their mission," Cardinal Zen said in a blog. As the communist regime in China has tightened its grip on Hong Kong, authorities refused permission to hold the usual Tiananmen memorial program in the city-state, the only place in China where the anniversary was allowed. Police had claimed it could increase the risk of coronavirus infection and pose a significant threat to the life and health of the public.

But tens of thousands defied the ban to stage a mass candelit vigil last night after knocking down barricades around Victoria Park.

Lee Cheuk-yan, chairman of the Hong Kong Alliance in Support of Patriotic Democratic Movements of China, told UCA News that “China is in darkness, so Chinese people can no longer talk about June 4.” The movement organizes the memorial "to encourage the people on the mainland" and to "tell them that Hong Kong will always tell the truth to the world."

He said police denying them permission was "politically motivated" and a threat to Hong Kong's freedom of assembly. Cardinal Zen in his blog said that in 1997, when China took over the territory from the British, China agreed on a policy of "one country, two systems,” which allowed democracy and autonomy in Hong Kong. People believed in the policy. "But we soon found out that we had been deceived," he said. The cardinal cited several moves by the CCP that had eroded Hong Kong's autonomy. Denying universal suffrage to Hong Kong people and denying the legality of the civil referendum were among them. The national security law that China's parliament approved for Hong Kong on May 28 is an expression of "dictatorship" and is "not for the state but to protect the regime," Cardinal Zen said. The planned law, reports say, aims to target the ongoing pro-democracy demonstrations in Hong Kong. The city's Beijing-backed administration call the pro-democracy movement a terrorist activity, and the new law seeks to punish crimes such as terrorism and secession.

"Hong Kong will be another Tiananmen," Cardinal Zen said, adding that the city "is simply not capable" of threatening China's central authority. He described Hong Kong as a lamb waiting to be slaughtered.

Lina Chan, executive secretary of the Justice and Peace Commission of Hong Kong, said political suppression had always existed. "This year the epidemic has been used to restrict freedom of assembly, but the situation will become even worse when the new security law is enacted," she told UCA News.