Cardinal Zen says he is willing to risk jail 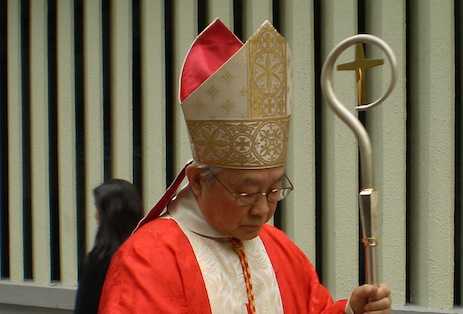 The former Bishop of Hong Kong, Cardinal Joseph Zen Ze-kiun, is prepared to go to jail if the promise made to the British colony when Britain handed Hong Kong back to China in 1997 (that is, free democratic elections and universal suffrage by 2017) is not kept.

While it looks less and less likely that China will agree to free elections in one of its territories, the debate in Hong Kong, Asia’s financial hub, has been getting more and more heated by the month. On the occasion of Hong Kong’s handover anniversary last 1 July, 430 thousand people marched through the city’s forest of sky-scrappers, in what was described as the biggest pro-democratic demonstration held in a decade.

But the greatest concern for the Chinese government and its allies in Hong Kong, is Occupy Central, a movement inspired by the Occupy Wall Street protest movement of 2011. Occupy Central was launched by a professor and a Protestant pastor and its aim is to paralyse the financial district in July next year, with a series of peaceful protests and acts of civil disobedience. The government runs the risk of the former colony’s image of stability and safety for business being compromised.

Unlike the rest of China, Hong Kong’s 7 million-strong population enjoys complete freedom of expression and religion and an independent judicial system. But its leaders – starting with the Chief Executive of Hong Kong who governs the former colony – are elected by a select number of voters, in a complex voting system which critics say was deliberately conceived to favour Beijing's allies. The opposition and the Occupy Central movement are asking the government to introduce a clearer voting process and allow universal suffrage so that the next Chief Executive can be elected in a more direct manner.

In a recent interview with Reuters, Cardinal Zen – who recently retired and has always been a critic of Beijing – said he was worried about potential infiltrations by pro-China protesters. Their aim is to provoke clashes, inciting the government to respond with  force. "I'm worried we may finish with some violence ... Then they have the pretext to crush everything," the 81-year old prelate said.

Full Story:Former Bishop of Hong Kong says he is prepared to go to prison if free elections are not held