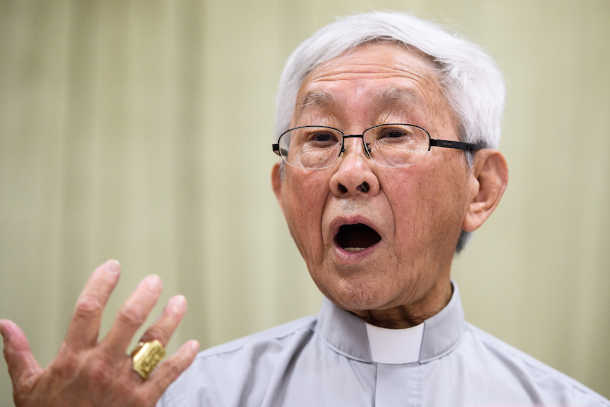 Cardinal Joseph Zen Ze-kiun speaks at a press conference at Salesian House in Hong Kong on Sept. 26 when he said that the agreement between the Vatican and China was a betrayal of the underground church. (Photo by Anthony Wallace/AFP)

Cardinal Joseph Zen Ze-kiun believes the provisional Vatican-China agreement on appointing bishops will allow the Chinese government to eliminate the underground church with the help of the Vatican.

Quoting from a Hungarian theologian, the Hong Kong emeritus bishop said the agreement seems not to violate canon law on issues related to pontifical power but gives discretionary power to Beijing on bishop appointments.

"This is an atheistic government which wants to suppress the church more than ever," he told reporters invited to a meeting at Salesian House in Hong Kong on Sept. 26.

"The Chinese government will succeed in eliminating the underground church with the help of the Vatican. Now that it is strengthening its suppression of religions, how could you think this will lead to a good agreement? Just like St. John the Baptist negotiated with King Herod, how could this be a good outcome? To say that the agreement is a good thing is very superficial."

Cardinal Zen noted that some people claim that the agreement aims to avoid the occurrence of illegitimate bishops that could cause a schism in the church. However, the day after the signing of the agreement on Sept. 22, the Bishops' Conference of the Catholic Church in China and the Chinese Catholic Patriotic Association (CCPA) issued a joint statement to reiterate its four principles.

Cardinal Zen stressed that "the reality is that the church is still divided." He said it was even more terrible to legitimize the seven so-called illicit bishops, two of whom have renounced the vow of celibacy of the clergy.

"According to the content of the agreement which is currently known, it only lifts the excommunications of these bishops but does not acknowledge them as bishops. However, if they are allowed to be bishops, how could they be good shepherds and how could followers obey them?" Cardinal Zen asked

He questioned whether these bishops recognized by the government could ask for the pope's forgiveness without approval of the authorities.

Cardinal Zen said the agreement brings "new suffering" to the underground church because its suffering in the past was from the government's suppression but now it comes from the agreement. "They fear that the Holy See is betraying the faith and that they want them to join this betrayal."

If the Holy See asked the underground church to join the CCPA but it refused and adhered to its faith, it would be equivalent to opposing the pope; otherwise, if it followed the pope, it would betray its faith, he said.

The cardinal believed that the only way would be to maintain neutral, but it could be very difficult. "At that time, you [those who refuse to join the CCPA] go home. You could pray at home too," he said.

Cardinal Zen urged the faithful of the underground church not to oppose the pope, "otherwise the government will be very happy."

"Although the agreement claims that it does not aim to establish diplomatic relations and only deals with the issue of faith, I doubt it. The [Vatican] secretary of state [Cardinal Pietro Parolin] has political ambitions, and [the establishment of diplomatic relations] is his aim because he feels glorious about that. He is a diplomat but secular."

He was afraid that people in Taiwan might not understand because it looks "like a betrayal of friends" but he believed that Taiwan and the Vatican would maintain cultural and academic exchanges.

Cardinal Zen said he never opposes dialogue but stressed that it needs to defend the faith simultaneously and it is the responsibility of bishops, cardinals and all faithful to defend their faith. "The Vatican does not do it for faith, so we have the responsibility to speak out. This is the obligation of the conscience," he said.

He also pointed out that he merely persuades everyone with rationality. "I am telling the truth. Many people are scared to tell [the truth] but I have to tell the truth. Maybe someone's conscience will be touched one day. Someone hears my voice."

Cardinal Zen added: "He [Cardinal Parolin] hates me but I would pray for him. I enjoyed fighting when I was young but now I only want to rest in peace."