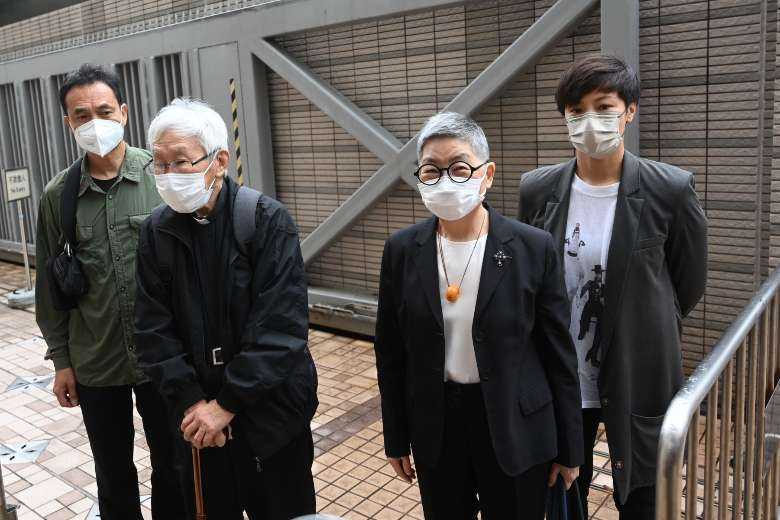 Cardinal Joseph Zen appeared in a Hong Kong court today charged with failing to properly register a protest fund after he was initially arrested under the city's national security law.

The 90-year-old cardinal, one of Asia's highest-ranking Catholic clerics, was among five prominent democracy advocates, including activist and singer Denise Ho and veteran human rights barrister Margaret Ng, who were detained earlier this month.

The group acted as trustees of a now-defunct fund that helped pay legal and medical costs for those arrested during huge and sometimes violent democracy protests three years ago.

They were arrested for "conspiracy to collude with foreign forces" but have not yet been charged with that offense, which can carry a life sentence under the sweeping security law imposed by Beijing in 2020.

Instead, all five of the fund's former trustees and its secretary were charged today with failing to register the fund as a society with police — a non-national security offence that can incur a fine of up to HK$10,000 (US$1,274) for a first conviction.

Each of the defendants, apart from activist Cyd Ho, who is already serving a jail sentence for unauthorised assembly, was present in court. All entered a plea of not guilty. Their trial will begin on Sept. 19.

Cardinal Zen's arrest in particular has triggered outrage from Western nations, who have accused China of eviscerating the freedoms it once promised Hong Kong

The investigation into the 612 Humanitarian Relief Fund was triggered when one of the group, cultural studies scholar Hui Po-keung, was intercepted at Hong Kong's airport on May 10 as he tried to leave to take up an academic post in Europe.

The investigation of the fund has also led to the first complaint made by the city's national security police about "professional misconduct" by the lawyers and barristers hired by the fund's beneficiaries.

Cardinal Zen's arrest in particular has triggered outrage from Western nations, who have accused China of eviscerating the freedoms it once promised Hong Kong.

On May 23, the city's security minister told local media the criticism was a "classic smearing campaign."

"To my understanding, the Vatican is a place to pursue justice and peace. If we did not act in accordance with the law because of one's role in the Holy See, then I think it would actually breach the Vatican’s principle of justice," said Chris Tang in an interview with the South China Morning Post.

The Catholic Diocese of Hong Kong issued a statement after the hearing saying they would "closely monitor the development of the incident", adding that Zen was "always in our prayers".

Hong Kong's vicar general, Joseph Chan, was present in court but said he was not there as a representative of the diocese. "He [Zen] was my teacher, so I came," he told AFP.

Chan said he is mainly worried about Cardinal Zen’s health but that he has so far appeared in good spirits.

The cardinal has arranged a nighttime Mass to pray for China on May 24.

LINDA
My continuing prayers for Cardinal Zen and all my persecuted Catholic brethren in China and Hong Kong. May God our Lord enact His justice soon!
Reply