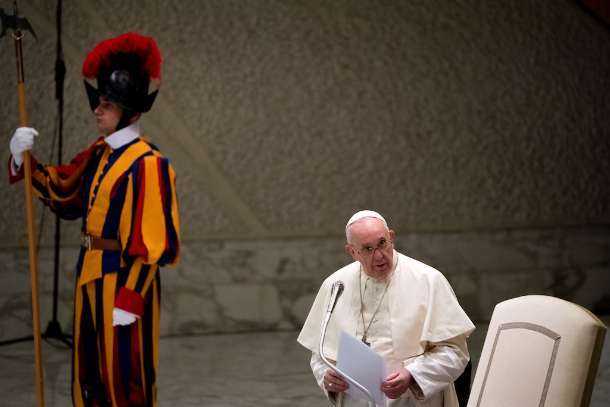 Pope Francis speaks during a private audience with members of the Italian police on Sept. 28 at the Vatican. The pope was unable to meet Cardinal Joseph Zen in Rome last week. (Photo: Tiziana Fabi/AFP)

Cardinal Joseph Zen flew to Rome to deliver a letter to Pope Francis begging for “a good bishop” to be chosen to lead Hong Kong Diocese.

His trip came as Vatican diplomats continue to work against the clock to refresh the September 2018 deal with Beijing on the appointment of bishops.

Multiple media reports have suggested that one of Hong Kong’s vicars general, Father Peter Choi, who is seen as close to Beijing, would be named as the new prelate, sidelining Auxiliary Bishop Joseph Ha Chi-shing, a critic of the Chinese and Hong Kong governments and who is close to Cardinal Zen.

“This year we are waiting in Hong Kong to have our bishop. It’s more than one and a half years that we have no bishop. And now the whole atmosphere is very much political, so I would like to remind the Holy Father that we really need a bishop who is a good shepherd for the flock,” Cardinal Zen told US Catholic news outlets.

“And I remember that at the beginning of his pontificate, he gave many recommendations: ‘A bishop should be like this and they should not be like that …’ And so, I hope he remembers all those things and really gives us a good bishop and not to pay too much importance to the political aspect of the problem.”

Despite staying in the Italian capital for four days last week, Cardinal Zen was not granted an audience with the pontiff, leaving him to hand his letter to the pope’s private secretary.

“I really want to remind them that we need them to be encouraging our people in the true faith, and to give us a good bishop, according to the heart of Jesus. And leaving aside maybe some political consideration. Because it’s too important. And I think the Hong Kong people in Hong Kong deserve a good bishop,” Cardinal Zen said.

“I hope my words would be useless — I mean, not necessary, because they know already — but in this moment they must forgive me for my anxiety. It is really worrying that after more than one and a half years, we still have no bishop. And the rumors are about the Vatican having more political consideration than necessary. I hope my message would be not necessary, but it may be useful.”

Hong Kong has been roiled by the new national security law imposed by Chinese authorities that effectively leaves Beijing in charge of the special administrative region, stripping away the “one country, two systems” formula that has been in place — although recently eroded — since 1997 when the territory was handed back by Great Britain after 99 years.

There are growing fears among Hong Kong Catholics and other Christians and Muslims that Beijing will imposes its state-run religious associations on believers in the city, replicating the situation on the mainland and placing increasing restrictions on worshippers and their families.

Cardinal Zen has been an outspoken critic of the Chinese regime and its ever-tighter embrace of  the authoritarian and officially atheist Chinese Communist Party.

Hong Kong has been without a bishop since the untimely death of Michael Yeung in January 2019. Rather than install a new bishop, Pope Francis instead appointed Yeung’s predecessor Cardinal John Tong Hon, himself Cardinal Zen’s successor, as apostolic administrator.

Cardinal Tong is understood to have backed Father Choi’s appointment as bishop, signaling a growing rift between the two senior men in the Hong Kong Church.