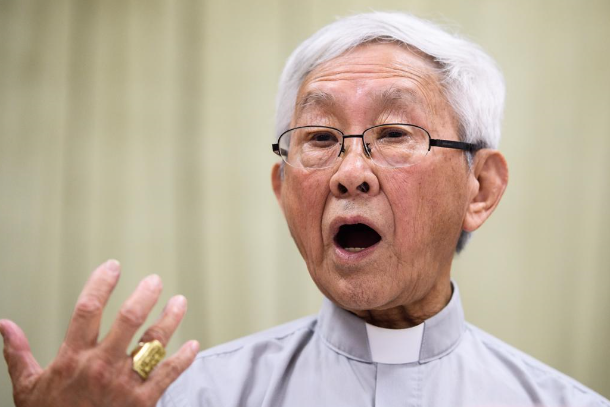 Cardinal Joseph Zen speaks at a press conference at the Salesian House of Studies in Hong Kong last September after the Vatican announcement of an accord with China on appointing bishops. (Photo by Anthony Wallace/AFP)

Outspoken Cardinal Joseph Zen Ze-kiun has denied an apparent accusation by the apostolic administrator of Hong Kong Diocese that he is disobedient toward Pope Francis.

In a pastoral letter released on March 17, Cardinal John Tong claimed, without naming anyone, that some Catholic Church members speak against the pope when he holds a different view from theirs.

Cardinal Zen denied the accusation and said he was just helping the faithful to discern whether the facts were right or wrong.

In a blog published on March 22, Cardinal Zen said Cardinal Pietro Parolin, the Vatican secretary of state, and Cardinal Fernando Filoni, prefect of the Congregation for the Evangelization of Peoples, also accuse him of being confused.

“The pope speaks infallibly only under very special conditions with regard to Catholic faith and morals. Still, we are bound to show Christian obedience to him when he, as supreme pastor of the universal Church, teaches or guides the people of God under other circumstances,” said Cardinal Tong in his pastoral letter.

He said Catholics are obliged to respect Roman Curia officials who are chosen by the pope.

Cardinal Zen said he agreed that Catholics should respect the Roman Curia but it cannot be guaranteed that such church officials will not be wrong even if they were chosen by the pope.

He also said the pope can be wrong on some issues and his conscience tells him what to do. “I should humbly tell him my opinion. In particular, as a cardinal, I have to advise the pope. They [cardinals] are the think-tanks of the pope,” said Cardinal Zen.

The Vatican signed a provisional agreement with China on appointing bishops on Sept . 22, 2018. However, the unpublicized content makes Cardinal Zen worried.

“Even though it is provisional, it is still valid at this moment. We have to know the content so that we can follow it with our thoughts and actions. Otherwise, we cannot know whether we are following it or not,” he said. He claimed that Cardinal Parolin had muted the Roman Curia’s internal dialogue by scrapping the China Church Affairs Committee and transferring Archbishop Savio Hon tai-fai, the former secretary of the Congregation for the Evangelization of Peoples and the highest-ranking Chinese official ever in the Vatican.

“He [Parolin] was the chief negotiator in the Sino-Vatican negotiations and saw the evil of the CCP [Chinese Communist Party] but I believe he did not report this truth to Pope Francis,” said Cardinal Zen.