Frustrated with the failure of his pleas to Pope Francis, Hong Kong cardinal takes his message to Washington Emeritus Hong Kong Cardinal Joseph Zen Ke-kiun, 88, has taken his battle with the Vatican over its controversial September 2018 deal with the Chinese Communist Party on the appointment of bishops to the US Congress, declaring that Beijing wants “total surrender” from the Holy See over the running of the Catholic Church in China.

The surprise move comes amid continued unrest in Hong Kong over the city’s pro-Beijing government, with critics seeing its slow response and poor management of the coronavirus epidemic, now given the official name COVID-19, coming on the back of eight months of street protests over the encroachment of Chinese authorities on the special administrative region.

Born and raised in Shanghai, Cardinal Zen has been a central figure in all levels of protests against Beijing stretching back decades. He is a regular at street marches and spent time sleeping outdoors with protesters during the 2015 Umbrella Movement that began a push for more democracy in the city, promised by Beijing under the “one country, two systems” policy.

More recently, he has turned his ire to the Vatican, both ahead of the deal with Beijing — a particular project of Pope Francis since his election to the papacy in 2013 — and since the signing of the deal, whose details remain secret. The deal is designed by Beijing to bring all of China’s 10-12 million Catholics under the control of the state-run Chinese Catholic Patriotic Association. The pontiff has expressed his “love for the Chinese people” as well as a fervent desire to visit China during his reign.

In a December opinion piece for The Washington Post, Cardinal Zen bemoaned the silence from the Vatican on the protests: “The Church has a history of standing up for what is right in Hong Kong. When refugees from communist China first began to flock to Hong Kong, Christian churches contributed with their makeshift schools, hospitals and social centers and, above all, by instilling the Gospel values. This is the spirit and support Hong Kongers need from the Vatican today.”

Cardinal Zen has reneged on a promise that he would step back and halt his public opposition to the deal. He has continued his campaign, claiming he represents most of the followers of the unofficial or underground church that makes up about 50 percent of China’s Catholics. He made several visits to meet Pope Francis on the matter as well as writing a number of letters outlining his concerns.

He has claimed the deal will “kill” the underground church with no new bishops being appointed and no new priests being ordained. He has previously predicted to UCA News that some will move to more welcoming Protestant churches and others will simply stay at home and worship.

“The situation is very bad. And the source is not the pope. The pope doesn’t know much about China,” Cardinal Zen told US news group Catholic News Agency on Feb. 10. “The Holy Father Francis shows special affection to me,” he said, noting his fight was with the Vatican’s Secretary of State Cardinal Pietro Parolin.

“I’m fighting Parolin. Because the bad things come from him,” Cardinal Zen said, adding that Cardinal Parolin was “so optimistic about the so-called ‘Ostpolitik’ (Eastern policy) compromise.” Cardinal Zen argued that you “cannot compromise” with the Chinese Communist Party. “They want complete surrender. That’s communism,” he said, describing Beijing as persecutors of the faith.

Washington has stepped up its campaign for religious freedoms around the world under the administration of Donald Trump — and China in particular — who garners significant report from the religious right in the United States. 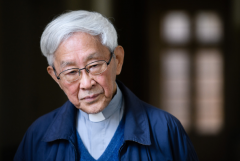 US Republican Congressman Chris Smith from New Jersey, who has been active in challenging China on human rights including religious persecution, described Cardinal Zen as “a Saint Paul of our time who is not only a holy and effective witness for the Gospel of Jesus Christ but is also a man of great truth about what is really happening in China.”

Certainly, the 2018 deal has yielded little so far for Rome. Only three of up to two dozen underground bishops have been accepted by the Chinese Catholic Patriotic Association despite Pope Francis lifting the excommunication of seven living bishops and one deceased prelate who had been ordained without the Vatican’s approval.

On Feb. 1, a fresh set of rules and regulations designed to bring to heel Catholic and Protestant churches, particularly unofficial churches, were implemented, adding to restrictions signed into law two years earlier.

“Chinese authorities continued to aggressively target unregistered Christian churches this past year as part of the implementation of new regulations on religious affairs,” the cross-party 2019 Congressional Executive Committee of China report from November 2019 stated.

Rome has been reported to be mulling the timing of a potentially controversial announcement of a new bishop of Hong Kong to replace Michael Yeung, who died in January 2019. Since then another retired cardinal, John Tong, 80, has come out of retirement to run the diocese of some 500,000 Catholics, while new reports have suggested that Auxiliary Bishop Joseph Ha Shi-ching, 60, may be passed over for the role as he is not acceptable to Beijing.

Cardinal Zen’s critics say the Vatican must at least try to reach some equanimity with Beijing in order to bring all Chinese bishops back into communion with the Holy See and that he has not given a complicated process time to play out.