Cardinal Tong's letter was sent on March 28, two days after Lam, a practicing Catholic, became the first woman Chief Executive of Hong Kong. She was selected with 777 votes from a 1,194-member election committee comprised mostly of Beijing loyalists. The diocesan weekly posted the letter on Facebook the day after Hong Kong Free Press published the letter on March 29.

Cardinal Tong said in his letter that he hoped Lam would "promote the democratic process in Hong Kong" so that the goal of universal suffrage will eventually be achieved as the church follows the "social teachings of successive popes" and attaches great importance to the significance of democratic elections.

The voter base of the recent election was "far from being able to achieve a degree of universal participation," the cardinal noted.

Lam promised in her election manifesto that "If elected, I will do my best to work towards creating a favorable atmosphere to take forward political reform within the framework of the 831 decision."

The 831 decision refers to one made by the Standing Committee of the National People's Congress in 2014 — that a 1,200-member election committee continue to decide chief executive elections and that only two to three candidates be able to run.

The decision was criticized by pro-democrats as not reflecting real universal suffrage because majority of citizens were deprived of the right to nominate people to the election committee. It led to the outbreak of the pro-democracy movement the same year.

An editorial in state-media Global Times on March 26, election day, warned that people in Hong Kong should avoid "naively thinking that just by copying foreign political formats they could solve the severe problems Hong Kong faces."

On March 27, nine key participants of the pro-democracy movement were prosecuted. Local media cited police sources saying that 39 more may follow, including Cardinal Joseph Zen Ze-kiun, retired bishop of Hong Kong. However, Cardinal Tong's letter did not touch on the prosecution.

In his letter to Lam, Cardinal Tong said the diocese is committed to serving the needy and is willing to collaborate with the government "for the goodwill of the people." He hoped she would "encourage a free airing of views, listen to voices from all sides and promote the unity and progress of our society." 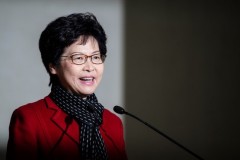 Cardinal Tong also hoped the government under Lam would continue to protect the local people's freedom of religious belief, expression and pluralism in running schools. Before the election, the cardinal demanded Lam drop a controversial religious policy from her manifesto.

In her victory speech, Lam pledged to build a better Hong Kong "through caring, listening and taking action."