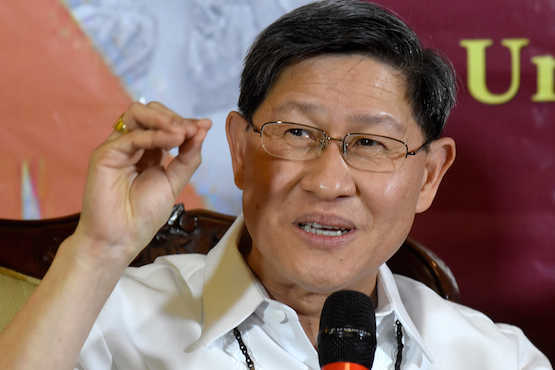 Cardinal Luis Antonio Tagle of Manila stresses a point during a media briefing on the forthcoming Philippine Conference on New Evangelization on July 4. (Photo by Angie de Silva)

Cardinal Luis Antonio Tagle of Manila has urged Filipinos to be "attentive to signs of love, hope, [and] light" amid ongoing clashes between government forces and terrorist gunmen in the southern Philippines.

The prelate said attempts by Islamic State-inspired terrorists to make the conflict look like a religious war "will not succeed" because Muslims and Christians in Mindanao are helping each other.

"Whoever plans to divide Muslims and Christians will not triumph," said the cardinal, adding that "stories of hope" continue to emerge from the conflict zone.

The prelate said he heard of stories about Muslims taking care of Christians whose lives are in danger or Christians helping suffering Muslims.

Cardinal Tagle was speaking on July 4 during a media briefing in preparation for the annual Philippine Conference on New Evangelization later this month.

Some 300,000 people, mostly Muslims, have languished in evacuation centers around Marawi since May 23 when terrorists attacked the city, burning a Catholic church and a Protestant school.

The gunmen belonging to the Islamic State-allied Maute group are still holding about 100 hostages, including a Catholic priest and several Catholic church workers.

Solicitor-General Jose Calida, the government's counsel, said the president's declaration is part of efforts to foil a plot to establish an Islamic state in Mindanao.

"All elements of rebellion were present. There is actual rebellion [on] the streets of Marawi …. The goal is to take over Philippine territory," said Calida.

Cardinal Tagle said Muslim-Christian understanding and unity in Mindanao will serve as the "foundation for change and reconstruction of society in Marawi."

"Let us help each other in the midst of conflict," said the Manila prelate. "Let us remove the wall that separates us … because we belong to one human family."