Devotees carry images of the Child Jesus for blessing during the celebration of the feast of the Santo Nino in Manila's Tondo district. (Photo by Vincent Go)

Cardinal Luis Antonio Tagle reminded Filipino Catholics to follow the example of the Child Jesus amid the trials and challenges that people encounter in life.

In what could be his last big public Mass before heading to the Vatican to take up his new post as prefect of the Congregation for the Evangelization of Peoples, the cardinal reminded Catholics to shun manipulation, oppression, and contempt for others."If there is manipulation, it means somebody is pretending to be powerful ... if there is oppression, it means somebody is pretending to be the master," said the prelate."That is not the attitude of a child in the Kingdom of God. It will only result in darkness," he added.Cardinal Tagle made the call during his homily at a Mass to mark a feast in honor of the Child Jesus at the Santo Nino de Pandacan parish on Jan. 18.
Related News 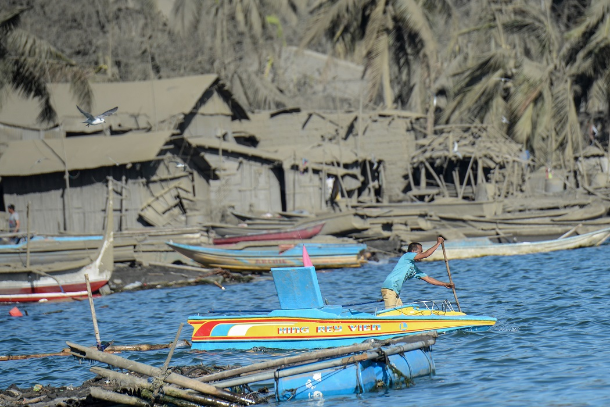 Across the country, Filipino devotees of the Santo Nino held festivals in honor of the Child Jesus.In the central Philippine city of Cebu, millions of people filled the streets throughout the 6.5-kilometer route of the solemn procession of the image of the Child Jesus also on Jan. 18.Authorities said the event was orderly and there was no untoward incident reported through the five-hour procession.Earlier in the day, at least 170 boats participated in the sea procession, which was led by a boat carrying the image of the Child Jesus.It was a re-enactment of the arrival of the image from Spain to Cebu in 1521.The image was supposedly brought to the country by Portuguese explorer Ferdinand Magellan on April 14, 1521, and was given as a gift to Queen Juana of Cebu upon her baptism.In 1565, when Spanish conqueror Miguel Lopez de Legazpi arrived in Cebu, a Spanish soldier reportedly found the image inside the house of a native, which was razed by a fire.In Manila, thousands of devotees brought images of the Child Jesus in the city's Tondo district for the ritual blessing of images early on the morning of Jan. 19.Cardinal Tagle, meanwhile, admitted that it is difficult to celebrate the feast while some parts of the country is facing another possible strong volcanic eruption."It is difficult to be a child in a situation affected by the eruption of Taal [volcano]," said the cardinal as he urged the faithful to offer prayers for those affected by the disaster."In our celebration, let us pray for them, so that through their stories we will learn how to be like the Child Jesus who depend on the Father," he said.He urged Catholics to always put God in their hearts amid the many temptations surrounding the community."There is always the temptation to replace God with another 'king.' When money is waved in front of us ... maybe the real God will be replaced and money is the one being worshipped," he said."If we get the chance to be famous, to be powerful, we might shove God away. It seems that going after power and wealth is more attractive," he added.The archbishop reminded parishioners to be grounded and keep their faith intact whenever a new temptation to drop God arrives. The Mexican president’s ambiguous relationship with the Church

Synodality in a socially distanced world

Readings of the day: Friday of the Thirtieth Week in Ordinary Time

Lord, help me to be as present to the needs of others as Jesus

Listen to our prayer with the whole Creation