Filipino Catholics join the "Walk for Life" in Manila in February to call for an end to drug-related killings. A 21-day nationwide "caravan for life" is set to end in Manila on May 21 to dramatize opposition to the proposed revival of capital punishment in the country. (Photo by Angie de Silva)

Share this article :
Cardinal Luis Antonio Tagle of Manila urged Filipinos to join a 21-day "Walk for Life," a nationwide march that started in the southern Philippines on May 4 and is set to reach Manila on May 21.
"The march gives us an opportunity to find ways of fighting crimes, for all crimes violate life, but without resorting to measures that also violate life like capital punishment," said the Manila prelate.
The cardinal said that through "personal and collective study, prayer, discernment, and action, we hope to be a people that promote a culture of life."
The activity aims to dramatize opposition to the proposal pending in the Philippine Senate to revive capital punishment in the country.
In the central Philippine city of Tacloban, young people joined the march as it passed the province of Leyte which was devastated by Super Typhoon Haiyan in 2013.
Leira Ann Regulacion, a 15-year-old student, said she is "afraid" with the proposed revival of the death penalty because offenders are "never given a chance to live a new life."
"This is sad, alarming and frightening," said Ninian Sumadia, a youth leader who joined the march from the southern city of Cagayan de Oro.
She said the government would only be "institutionalizing the culture of death" with the passage of the death penalty law.
"I am calling our fellow young people to join this call against the death penalty because it is a threat to our life," she added.
The head of the Philippines Catholic bishops' conference had earlier issued a call to the country's church leaders to support the march.
Archbishop Socrates Villegas of Lingayen-Dagupan, head of the bishops' conference, said the lay initiative is "most deserving of support from all who want to make a clear unequivocal stand for life."
"It is our duty as pastors to encourage them, to bless them, and invite more lay faithful to assist them in the mission of social transformation," said the prelate in a statement.
Related News 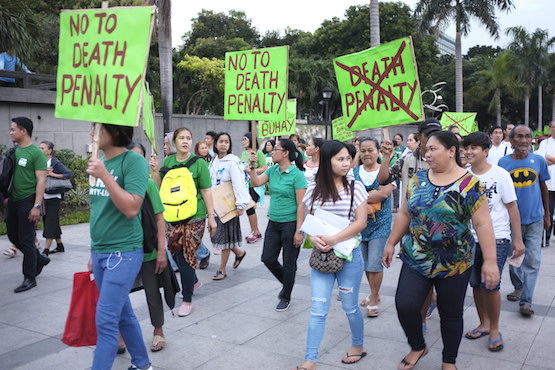