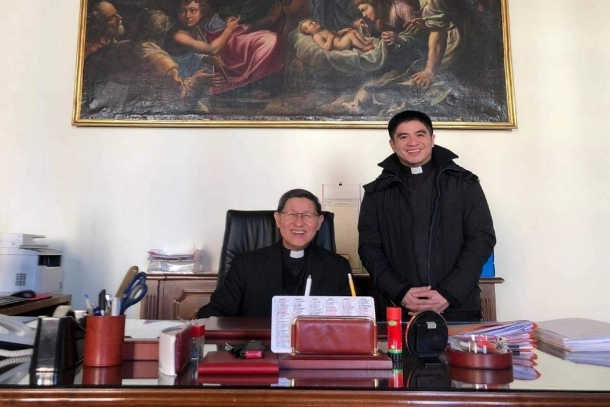 Cardinal Luis Antonio Tagle poses for a photograph with his personal secretary, Father Reginald Malicdem, in his new office at the Congregation for the Evangelization of Peoples in the Vatican. (Photo courtesy of Father Malicdem)

Filipino Cardinal Luis Antonio Tagle, the new prefect of the Congregation for Evangelization of Peoples, officially started work in Rome on Feb. 12.

Addressing those who welcomed him to his new office, the cardinal said: "I am the prefect but I am not perfect." "I came here as a student in order to learn from you, my masters and teachers," he added.Cardinal Tagle's message was shared by Father Reginald Malicdem, the cardinal's former personal secretary in Manila Archdiocese, who accompanied him to Rome.The priest said Cardinal Tagle admitted before his new co-workers that he did not study in Rome and that he took it upon his self to learn the Italian language."So I speak a unique Italian of my own," said the cardinal, who extended "greetings and affections from Asia and especially from the Philippines and Manila."Father Malicdem also shared photos of Cardinal Tagle in his new office. In one photograph, the cardinal was seen looking out of his office window."It overlooks the famous column of the Immaculate Conception near the Spanish Steps," Father Malicdem said. "This will surely remind him of Manila Cathedral and Manila Archdiocese."

Cardinal Tagle left Manila on Feb. 9 to assume his new post at the Vatican.

Pope Francis appointed Cardinal Tagle prefect of the Congregation for the Evangelization of Peoples, also known as Propaganda Fide, in December.The Manila prelate's new assignment is an important position in the Vatican as it takes care of the mission in territories mostly in Asia and Africa.The congregation was established nearly 400 years ago in 1622 by Pope Gregory XV with the task of ensuring the "transmission and dissemination of the faith throughout the whole world."As head of the office, Cardinal Tagle will oversee the work of most dioceses in Asia, Africa and Oceania, in which one third of the Catholic Church’s 4,000 dioceses are found.Cardinal Tagle is also president of Caritas International, a confederation of 165 Catholic relief, development and social service organizations operating in over 200 countries and territories.