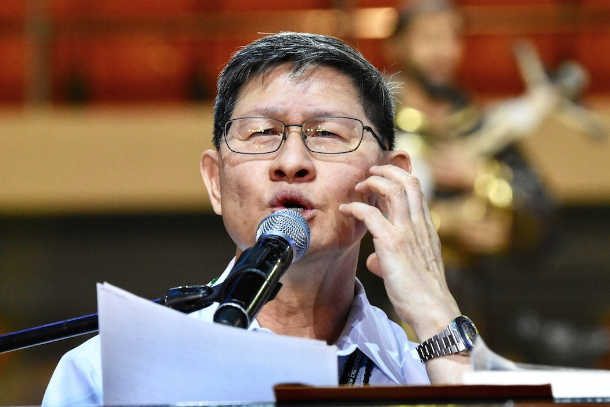 Cardinal Luis Antonio Tagle of Manila reminded priests and nuns who attended the first day of this year's Philippine Conference on New Evangelization to always live with the poor.

The Manila prelate told ordained ministers and the religious to always "strive to be holy."

"We strive to be holy because we are baptized," he told the annual five-day gathering at the University of Santo Tomas in Manila.

The cardinal said people can always draw inspiration from Jesus and the witnesses of faith and holiness.

"We see that holiness of life among simple mothers and fathers, simple janitors, [a] simple cleaner in the canteen, and laundry woman who suffers in order to send her child to school," he said.

"Sharing in the priesthood of Christ is sharing in his holiness — availability to do God's will and existential solidarity with neighbors, especially the wounded and those who have committed mistakes in life," said the prelate.

Cardinal Tagle urged participants not to be complacent in their faith.

"Do not grow slack in zeal. Be firm in spirit. Serve the Lord. Rejoice in hope. Endure in affliction. Persevere in prayer," he said.

"Do not be conquered by evil, but conquer evil with good. This is the priesthood of Christ in daily life," he added.

Cardinal Tagle started the annual gathering on new evangelization in 2013 as a response to a call for the renewal of faith in the Philippine and Asian context.

An estimated 2,000 participants attended the first day of this year's gathering