Cardinal Luis Antonio Tagle of Manila speaks during the last day of the Fifth Philippine Conference on New Evangelization in Manila on July 22. (Photo by Angie de Silva)

A teary-eyed Cardinal Luis Antonio Tagle of Manila has lamented the deaths of innocent people killed since Philippine President Rodrigo Duterte's assumed office during the last day of a summit on new evangelization on July 22.

Addressing a crowd of priests, nuns, religious and lay people, the prelate asked if people were happy with all the deaths around them.

"Do you rejoice at the deaths of the innocent?" Cardinal Tagle asked in the wake of a statement released by the country's Catholic bishops condemning a wave of killings across the country.

In his prayer, the Manila archbishop spoke to God about many innocent people dying.

"We want to believe that you do not rejoice in their death. But there are so many of them," said the prelate.

Police have reported more than 23,000 killings over the past two years, which human rights groups said were likely linked to the government's war against narcotics.

The cardinal included in his prayer a 36-year-old migrant worker who was killed in Slovakia for defending two women from being attacked.

"Where do we see your face? Where do we hear your word? Some people are asking, where are you?" asked the cardinal.

The cardinal told about 8,000 participants at the Fifth Philippine Conference on New Evangelization to become "bread" for others amid the hunger in the world.

"Let us be bread, broken, shared for others so that we are all moved with compassion and can feed others," he said in his parting message at the University of Santo Tomas in Manila. 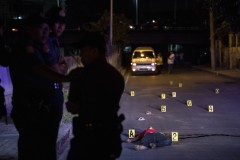 Tagle steps up to unite church in anti-Duterte march Cardinal Tagle of Manila hits 'kings' who use violence

"All that we have, all that we are, if taken, blessed and shared can become the bread of life for all," Cardinal Tagle said.

He said fish-shaped bread, distributed to participants, was a "reminder of our call to compassion and solidarity."

"Faced with so many kinds of hunger in our world we hear the words of Jesus: You give them something to eat," said the prelate.

Archbishop Gabriele Caccia, papal nuncio to the Philippines, reminded those present that being compassionate means not looking at people as numbers.

"If we want to have compassion don't look at numbers. Look at people. Each one is unique. Each one has a name. Do as Jesus does. He knows us by name," he said.

Cardinal Tagle introduced the annual conference on new evangelization in 2013 to further explore the theme of mercy in the context of Filipino culture.