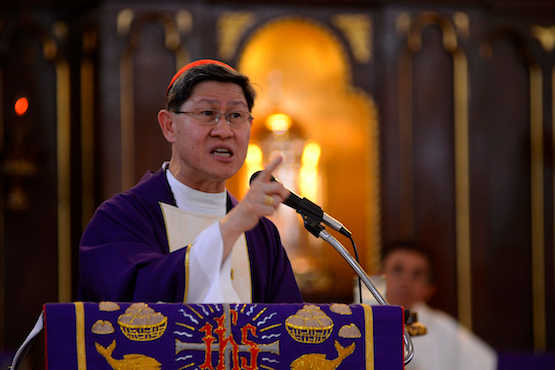 Cardinal Luis Antonio Tagle of Manila condemns the proliferation of illegal drugs during the launch of a church-run drug rehabilitation program on March 17. (Photo by Maria Tan)

Cardinal Luis Antonio Tagle of Manila condemned the proliferation of illegal drugs, but said that in the war against narcotics, drug addicts should not be left behind.

"It is hard to journey towards a new life if you are alone," said the prelate during the launch of a church program for illegal drug dependents that have been the target of the government's anti-narcotics war.

More than a million self-confessed drug addicts and dealers surrendered to the government from July 1 to Dec. 31, according to the Philippine National Police.

In his homily during the launch of the church rehabilitation program on March 17, Cardinal Tagle stressed the importance of the community in helping drug dependents.

Cardinal Tagle appealed to Catholics "not to leave behind and leave alone those who are willing to change for the better."

He warned Filipinos not to brand drug addicts as outcasts. "Don't say this person is useless and can be discarded," he said.

"Avoid saying that they are useless and can be thrown away. We do not know what the Lord will do. What man throws away, God uplifts," said the Manila prelate.

Although supportive of the government's anti-narcotics drive, Catholic Church leaders have been vocal in their criticism against the killing of an estimated 8,000 suspected drug users and dealers since July.

The government welcomed the church's initiative providing a "faith-based approach" to solving the drug problem.

Interior Undersecretary John Castriciones said the scale of the narcotics problem is "so big" that the government needs the cooperation of all sectors, especially the church.

"It's a humungous problem in our country today that human effort is not enough. It will take a true God to solve this problem," said Castriciones who attended the launch of the church program.

Of the 47 drug rehabilitation centers in the country, the government runs only 15, which can accommodate about 20,000 people.

Castriciones admitted that the government is "so much lacking in resources" to rehabilitate the 1.2 million drug dependents who surrendered.

"We really should help each other because the government alone cannot solve these problems," he said.

President Rodrigo Duterte has repeatedly claimed that there are about four million Filipino drug addicts as he defended his "all-out war" against illegal drugs.

Castriciones warned of "consequences beyond our imagination" if communities would not cooperate in the fight against narcotics.

In his homily, Cardinal Tagle said the commerce in illegal drugs is tantamount "to killing my neighbor."

"If I sell or give something that can destroy my neighbor, and I gained from it, because of an evil committed against my neighbor, it's like selling and killing that person," said the prelate.