Poor response to sex abuse victims has wounded them and the entire body of Christ, Manila prelate tells Vatican summit 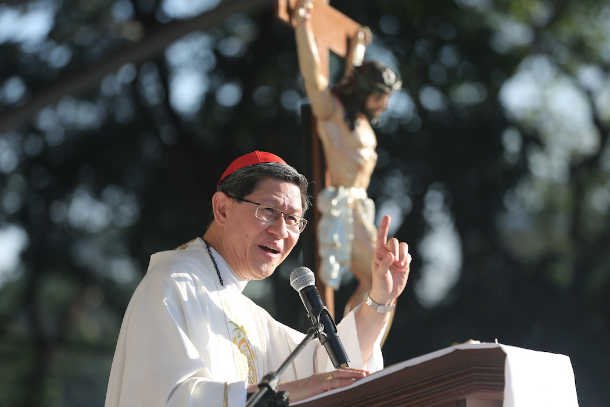 Cardinal Luis Antonio Tagle delivers a homily in Manila during the Walk for Life event on Feb. 16. (Photo by Joe Torres/ucanews.com)

Cardinal Luis Antonio Tagle of Manila has admitted that Catholic bishops have inflicted wounds on clergy sex abuse victims by covering up for erring priests.

The Manila prelate was speaking at the start of a historic meeting at the Vatican this week to address the sex abuse issue, especially of minors.

"We humbly and sorrowfully admit that wounds have been inflicted by us bishops on the victims and in fact the entire body of Christ," the cardinal said in a speech on Feb. 21.

Cardinal Tagle said the "lack of response" to the victims, "even to the point of rejecting them and covering up the scandal to protect perpetrators and the institution has injured our people."

In his speech to Church leaders at the start of the summit, Pope Francis said the world expects "concrete measures" to address the abuse of children by members of the clergy.

"The holy people of God are watching and waiting not for simple and obvious condemnations but concrete and efficient measures," said the pontiff.

In his speech, Cardinal Tagle said the "theme of healing wounds has been the subject of many interdisciplinary studies."

"I believe we need to recover and maintain a faith and ecclesial perspective to guide us," said the cardinal.

He emphasized a "faith and ecclesial perspective" to guide church leaders into looking into the controversial issue of sex abuse.

Back home in Manila, the presidential palace said Philippine President Rodrigo Duterte did not feel Pope Francis was alluding to him when he said those who criticize the Church are "friends, cousins and relatives of the devil."

"When he addresses those members of the Church who cannot be celibate to leave the Church, he is a critic," Duterte spokesman Salvador Panelo said.

"But it does not mean also that when you criticize you are evil. You’re just expressing concern and opposition to certain irregular behavior," he added.

He said the pope is "one of the better critics of the Church" because he "criticizes members of the Church who are engaged in what he perceives to be immorality."

The Philippine president has repeatedly lambasted the Catholic Church and accused bishops and priests of womanizing, molesting children and corruption.

Ahead of the Vatican summit on sex abuse, Duterte again attacked the Church, saying the pope convened the meeting because "four out of five" priests are gay.

In a speech on Feb. 20, the president cited the arrest in December of an American priest accused of molesting at least 50 people in the central Philippines.

Cardinal Tagle, one of nine speakers during the three-day summit at the Vatican, said the abuse of minors by ordained ministers "has inflicted wounds not only on the victims but also on their families, the clergy, the Church, wider society, the perpetrators themselves and bishops."

He said people are right in asking: "Have you, who are called to have the smell of the sheep upon you, not instead run away when you found the stench of the filth inflicted on children and vulnerable people you were supposed to protect too strong to endure?"

"Wounds call for healing, but what does healing consist of? How do we, as bishops, who have been part of the wounding, now promote healing in this specific context?" said the cardinal.

He noted that there are times that bishops and religious superiors are "tempted ... to choose between victim and perpetrator."

"A focus on justice and forgiveness shows us the answer: We focus on both," said Cardinal Tagle.

"Regarding victims, we need to help them to express their deep hurt and to heal them. Regarding the perpetrators, we need to serve justice, help them to face the truth without rationalization, and at the same time not neglect their inner world, their own wounds."

Pope Francis called the summit supposedly to confront clergy abuse in the Church.

"In the face of this scourge of sexual abuse perpetrated by men of the Church to the detriment of minors, I thought I would summon you," said the pope on the first day of the Rome summit.

About 200 Catholic Church leaders from across the world are attending the meeting with 14 leaders of Oriental Catholic churches, 22 superiors general of religious orders and 14 Vatican officials.