Iraq's most revered Shia cleric, Grand Ayatollah Ali al-Sistani, meets with Pope Francis and his delegation at his home in the holy city of Najaf on March 6. (Photo: Ayatollah Sistani's Media Office/AFP)

Pope Francis' focus on "human fraternity" does not aim simply at promoting tolerance among different religions and ethnic groups but ultimately pushes for a recognition of the full citizenship rights of all minorities, said Cardinal Miguel Angel Ayuso, president of the Pontifical Council for Interreligious Dialogue.

The pope's visit to Iraq March 5-8 told the country's Christian communities that they are "truly part of the life of the universal church" and that within Iraq they should not feel like isolated communities forced to "struggle to survive or flee but are active citizens with the right and obligation to contribute to the development of society," the cardinal said.

Writing in L'Osservatore Romano, the Vatican newspaper, Cardinal Ayuso said the pope's visit to Iraq not only encouraged Catholics in their faith, but demonstrated to all Iraqis that the Christian community exists in their country and that it is possible "to live side by side with believers from other religions."

Pope Francis' trip is one "destined to enter pages of the history of all religions and humanity itself," the cardinal wrote in the newspaper's March 12 edition.

Cardinal Ayuso accompanied Pope Francis throughout his visit and was one of a handful of people who went with the pope March 6 to meet Ayatollah Ali al-Sistani, one of Shiite Islam's most authoritative leaders.

Throughout his trip, Pope Francis "reaffirmed the principles of equality among all the ethnic, social and religious components of the country," an equality "founded on citizenship," the cardinal said. "On this path, he has been accompanied by al-Sistani, who, in a declaration, wanted to affirm his commitment to working so that 'Christian citizens can live like all Iraqis in peace and security with all their constitutional rights.'"

In some countries, Christians or other minorities are given a "protected minority" status that allows them to survive in the country but does not guarantee equal rights or equal access to education and jobs, for example.

At the root of the idea of "human fraternity" and interreligious dialogue, he said, is: "God is the creator of everything and everyone, so we are members of one family, and we must recognize that."

Recognizing all people as children of the one God, the cardinal said, moves relationships beyond "mere tolerance to fraternal coexistence, recognizing the diversity that exists among us, neutralizing violence and living as brothers and sisters." 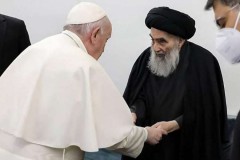 Furthermore, he said, it calls on members of different religions and, especially, religious leaders to cooperate and collaborate to ensure that everyone enjoys equal rights everywhere.

"We are all members of the one human family and as such we have equal rights and responsibilities as citizens of this world," Cardinal Ayuso said. "At the basis of our collaboration and dialogue are the common roots of our humanity, so we do not start from scratch in dialogue."

Obviously, he said, the search for peace is a key component of interreligious dialogue and the promotion of human fraternity.

When members of different religions meet, speak to each other, get to know each other and recognize each other as brothers and sisters, "they make themselves peacemakers wherever they operate," the cardinal said.