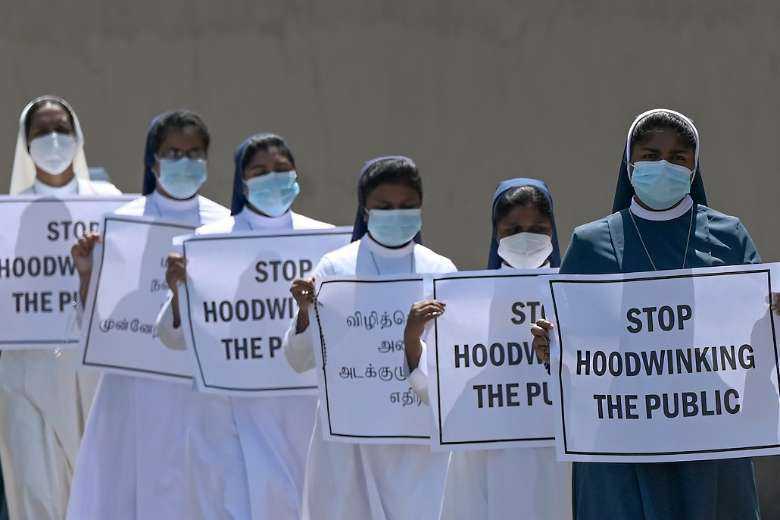 Catholic nuns hold placards during a demonstration against the government amid the worsening economic crisis in Colombo on April 5. (Photo: AFP)

Cardinal Malcolm Ranjith of Colombo, two bishops and hundreds of priests and nuns joined thousands of others marching in the streets of capital Colombo on April 6.

"Ordinary people have taken to the streets to demand that the government resign," said Father Jude Chrisantha, archdiocesan director of mass communications.

"The president allowed ministers who sold the country's resources to take commissions and bribes. Therefore, Gotabaya Rajapaksa is responsible for creating the crisis. We seek to change the system, not merely change politicians. The problems can't be solved by changing heads.”

Thousands of people have protested in cities and villages across the nation demanding the resignation of the president and the government amid rising prices of essential goods, fuel and daily power blackouts.

"People have taken to the streets to demand that the president and 225 members of parliament go. The people also demand that the money stolen by the politicians from the country be returned"

Father Cyril Gamini, a member of Colombo Archdiocese's committee on the 2019 Easter attack, said the government has no sense of the suffering of ordinary people and is determined to hold on to power.

"People have taken to the streets to demand that the president and 225 members of parliament go. The people also demand that the money stolen by the politicians from the country be returned," the priest said.

Transparency International Sri Lanka (TISL), an independent organization fighting corruption, said the current situation has been caused by decades of misuse and mismanagement of public resources on a large scale, systemic corruption coupled with kleptocracy, and an overall lack of transparency and accountability in both governance as well as in the public service sector.

“We strongly condemn the attempts of the president and the administration to stifle the constitutionally enshrined freedoms of expression and lawful assembly of citizens through the use of emergency regulations, curfews and social media blackouts,” TISL said.

"We call on the law enforcement authorities to act independently in order to ensure that those in power are held accountable for their actions and brought before the law. They must also safeguard the constitutionally guaranteed rights of the people and impose serious penalties against officers of the law who carry out their own form of vigilante justice.”

The Free Media Movement (FMM), a media watchdog, strongly condemned anti-democratic actions taken by the government to stifle dissent and quell the voices of the people affected by its gross failure at managing the economy, and urged the government to take immediate action.

"The constitution of Sri Lanka recognizes freedom of expression, including freedom of speech and publication, as well as freedom of assembly and association, while the freedom to protest peacefully and display dissent has been widely interpreted by a number of Supreme Court rulings as part of freedom of expression. It also recognizes that these rights include the right to criticize the government and the head of state. The above actions taken by the government are arbitrary and violate all these rights," said the FMM.