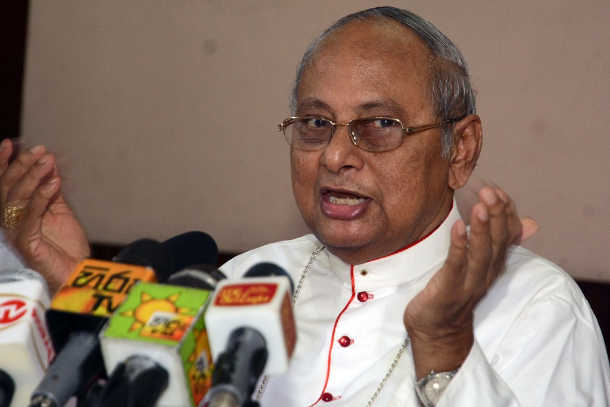 Cardinal Malcolm Ranjith introduces a special program for victims of the Easter Sunday attacks in Colombo on Feb. 18.

Cardinal Malcolm Ranjith has demanded to know who funded last year’s deadly Easter Sunday attacks on churches and hotels in Sri Lanka and whether a political force was involved.

"The people of this country have a right to know the truth about the Easter bomb attacks. We hope that our political leaders will work to fulfill that obligation," said Cardinal Ranjith as he introduced a special program for victims of the attacks on Feb. 18 in Colombo.

"It is difficult for us to say what happened based on the reports of former government commissions. We believe they may have worked to cover up what happened. We are pleased with the new presidential commission. They are trying to explain every aspect of the issue."

The suicide attacks on April 21 were a turning point in the presidential elections as national security became the hot button issue of the political agenda.

The cardinal said he decided to appear before the commission to represent the concerns, grievances and views of the victims, their families and the entire Catholic community at large.

He said the responsible parties should be brought to book and those linked to the attack directly and indirectly should be punished.

Earlier Cardinal Ranjith said that if he had known that an attack had been planned, he would have closed all churches and protected the faithful.

"It is the responsibility of the Archdiocese of Colombo to never forget all those who lost their lives in this tragic attack on that day. Special prayer services will be held at all the main churches of the archdiocese from April 17 to 21," he said on Feb. 18.

Special prayers and holy hours will be organized daily from 7pm. On April 20, vigil services at St. Anthony's Shrine in Kotahena and St. Sebastian's Church in Negombo will begin at 8.45pm.

"Most of our 300 brothers and sisters who lost their lives in the brutal terrorist attack by a group of young men who claimed to be serving their God were devotees attending Easter services," said Cardinal Ranjith.

"Anybody who had dealings with these people who set off the bombs, even their bank accounts and their telephone calls, has to be investigated."

Ravi Fernando, a parishioner of Katuwapitiya who supports the education of victimized children, said the investigations are moving too slowly. "After almost a year, the victims are still suffering, yet the guilty remain free," said Fernando.