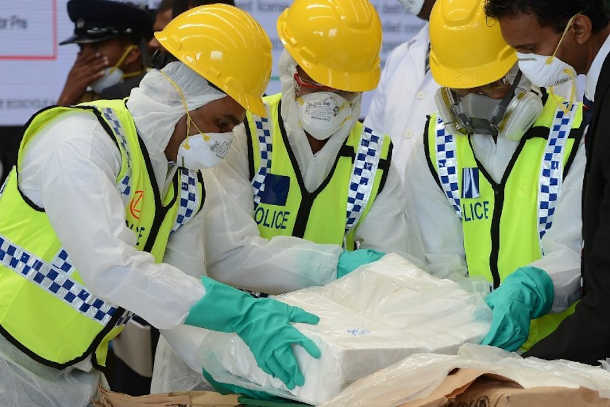 Sri Lankan police prepare seized cocaine to be destroyed under judicial supervision in Katunayake on Jan. 15, 2018. Around a tonne of the narcotics was seized in 2017 while in transit via the capital Colombo. (Photo by Lakruwan Wanniarachchi/AFP)

Amid growing fears that Sri Lanka is turning into a transit hub for the regional illicit drug trade, Cardinal Malcolm Ranjith will join other religious leaders this month in holding a protest to raise awareness of the menace.

The archbishop recently issued a pastoral letter urging all parishes and institutions to stage a demonstration on a key road in Colombo on March 31 after Sunday Mass denouncing drug peddlers.

“The drug trade is prevalent in our archdiocese," he said. “That is why I am organizing a special day of prayer and a public meeting with state leaders to protest against the use and sale of hard drugs this Sunday."

He requested that similar banners be put up on church grounds.

"The situation in our country, and especially in our archdiocese, is dire. I was told by a leading security forces officer that Catholic youth have an above-average propensity to use illegal drugs," the prelate said.

"Let us not be shy in providing the necessary information to the relevant agencies, about any person who is known to be peddling or transporting narcotics."

President Maithripala Sirisena has promised the death penalty will be applied to drug offenders in some cases. Local newspapers have been advertising for state executioners.

He said anyone who has an ethical problem with the use of capital punishment should understand the catastrophic impact narcotics can have on young people’s lives.

The European Union and Amnesty International have condemned his decision and asked him to reconsider resorting to capital punishment, even as authorities began advertising for a hangman with “excellent moral character."

The British brought Sri Lanka under their control in 1815 and banned most forms of execution, such as beheading and drowning, but sanctioned the use of hanging. Even though capital punishment remains on the statute books, no executions have taken place since a man was hanged in 1976.

Cardinal Ranjith said he wanted to keep the Catholic community involved in anti-drug campaigns spearheaded by the government and other organizations.

"If any Catholics are found to be engaging in this trade and they don’t repent, it is best the parish churches don’t welcome them and do not provide them Catholic rights like receiving Holy Communion or a full burial service," he said.

"Let us also help those young people who are addicted to drugs find suitable rehabilitation programs to free them from their addiction," the cardinal said.

He entreated parents to keep a close eye on their offspring to ensure they don’t get caught up in this malevolent trade.

"I call upon Catholics and indeed any person of good will, regardless of creed, status or political persuasion, to join us in this struggle," Cardinal Ranjith said.

Within the first six months in 2018, the Police Narcotics Bureau reported that 42,515 arrests were made. Of those, 16,768 offenders were nabbed for peddling heroin and 24,746 for selling cannabis.

Meanwhile, this year the navy arrested nine Iranians who were found to be transporting 100kg of heroin by trawler along the southern coast on March 24. A few weeks earlier, police seized 300kg of heroin worth $17 million.

President Sirisena said the government often receives complaints of students being addicted to drugs at prestigious secondary and other schools.

He said the security forces, public servants and students must be made to take an oath vowing to refrain from using narcotics.

He also promised to step up jointly organized drug raids starting next month.