Religious ties are being destroyed by fear of terrorism, says Cotabato prelate 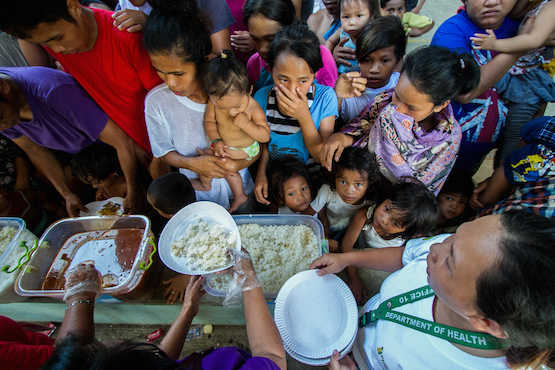 Residents of Marawi City who were displaced by the weeklong fighting between security forces and terrorist gunmen line up for food in an evacuation center in the city of Iligan in Mindanao. (Photo by Mark Saludes)

A leading Filipino prelate said "demonic" acts by gunmen claiming to be Islamic militants in the southern Philippine region of Mindanao are dividing Muslims and Christians.

Cardinal Orlando Quevedo of Cotabato said the relationship between Christians, Muslims, and tribal people in the region is being destroyed by an ideology "that asserts the morality of killing in the name of God."

"This violence of terrorism is creating great fear and anxiety in Mindanao," said the prelate, adding that it is "a demonic ideology," which is being condemned by true believers of Islam.

The cardinal lamented that the "specter of terrorism, hatred, hostility, prejudices and biases … the specter of darkness is stalking our beloved land."

He said some political leaders in the region have been "aggravating poverty and underdevelopment" through greed and corruption coupled with the proliferation of illegal drugs.

"Thousands of poor people are being trodden underfoot and forgotten," amid ongoing clashes between security forces and gunmen in the city of Marawi.

Fighters of the local terror Maute group tried to occupy the city on May 23, burning a Catholic cathedral, a Protestant school, and the city's jail.

The vicar general of the Prelature of Marawi, Father Teresitio Suganob, and several parishioners and residents remain hostages.

The government said the death toll in the week-long fighting had reached 104, including 65 militant fighters and 20 soldiers and policemen. At least 19 civilians were also reported killed.