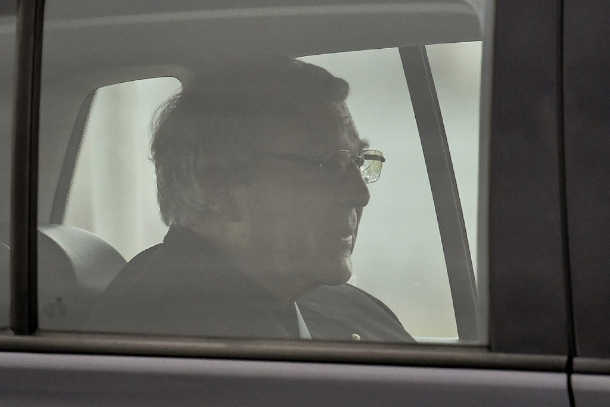 Cardinal George Pell is driven away after being released from Victoria's Barwon Prison on April 7 after his child sex abuse conviction was quashed by Australia's High Court. (Photo: William West/AFP)

The former Vatican treasurer, 78, was convicted by a jury in 2018 of performing sex acts on the boys in St. Patrick's Cathedral in Melbourne in 1996.

It took seven High Court judges a little under four hours to reverse that decision and quash his six-year jail sentence. They ruled unanimously that that the jury had not properly considered all the evidence presented at his trial.

It was the cardinal's final legal challenge after his conviction was upheld by a lower court last year.

"I have consistently maintained my innocence while suffering from a serious injustice," Cardinal Pell said in a statement after the decision.

The cardinal, who had served 400 days of his sentence, was released from Victoria's Barwon Prison shortly after midday Australian time and driven to a Carmelite monastery in Melbourne, according to local media.

Cardinal Pell said an injustice had been remedied and he held "no ill will to my accuser."

"However, my trial was not a referendum on the Catholic Church, nor a referendum on how church authorities in Australia dealt with the crime of pedophilia in the Church."

The father of one of the choir boys in the case was in shock at the decision, his lawyer said. "He says he no longer has faith in our country's criminal justice system," said Lisa Flynn.

In December 2018, Cardinal Pell was found guilty of sexually abusing two 13-year-old choir boys in private rooms of St. Patrick's Cathedral when he was archbishop of Melbourne.

He appealed against the verdict in Victoria's Court of Appeal last year, but three judges upheld the decision by a 2-1 majority.

In his latest appeal, Cardinal Pell argued that the jury relied too heavily on one person's evidence.

"The jury, acting rationally on the whole of the evidence, ought to have entertained a doubt as to the applicant's guilt," said the court in its judgment.

In 2014, Pope Francis appointed Cardinal Pell as prefect of the Secretariat of the Economy, giving him responsibility for running the Vatican's finances. He launched reforms to the Vatican's financial operations and opened them up to a degree of scrutiny never seen before.

But he encountered resistance from vested interests within the Holy See. Reforms are believed to have stalled since he left Rome. Prosecutors last year raided the offices of the Vatican's Secretariat of State as part of an inquiry into shady investments.