The Lebanese are not alone. The Church accompanies them all spiritually, morally and materially 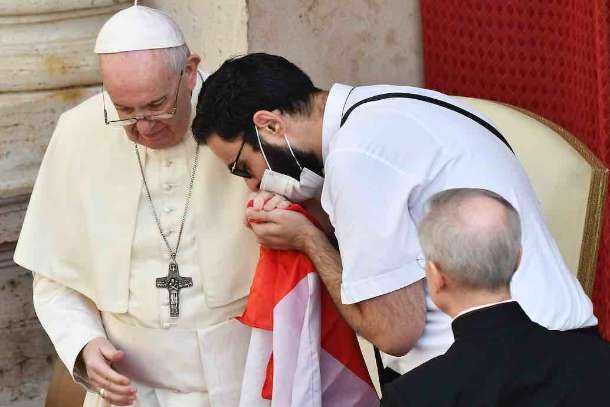 A Lebanese priest kisses the hand of Pope Francis holding Lebanon's flag after they prayed for Lebanon during a limited public audience at the San Damaso courtyard in The Vatican on September 2, 2020 during the COVID-19 infection, caused by the novel coronavirus. (Phot: Vincenzo Pinto / AFP)

A senior Vatican official has assured the solidarity of Pope Francis and the entire Church to the Church in Lebanon during a Mass in Beirut.

Cardinal Pietro Parolin, the Vatican Secretary of State, was celebrating in Beirut on Sept. 3, a month after a double blast struck the West Asian nation. "It is with great joy that I find myself among you today, in the blessed land of Lebanon, to express to you the closeness and solidarity of the Holy Father and, through him, of the whole Church," Cardinal Parolin said.

The Vatican official's two-day visit to Lebanon was marked by a Mass for some 1,500 Maronite Catholics at the Shrine of Our Lady of Lebanon, in the Harissa hills, north of Beirut. "Lebanon has suffered too much and the past year has been the scene of several tragedies affecting the Lebanese people," Cardinal Parolin said.

An acute economic, social, and political crisis continues to rock the country. The coronavirus pandemic situation has worsened. A month ago, the tragic explosion of Beirut's port ripped open the capital of Lebanon and caused terrible misery, Cardinal Parolin said in his homily.

The blasts had killed nearly 200 people, injured thousands, and left thousands homeless. "But the Lebanese are not alone. We accompany them all spiritually, morally and materially," the cardinal added. Cardinal Parolin's visit coincided with the papal call to observe "a universal day of prayer and fasting for Lebanon" on Sept. 4. Lebanon was already plagued by a collapsing economy when it was traumatized by the blasts, blamed on 2,750 metric tons of ammonium nitrate stored in a port warehouse for years. Parolin met Lebanon's Catholic President Michel Aoun, on Sept. 4 and conveyed greetings from Pope Francis.  Religious leaders representing the Sunni, Shiite Muslim and Druze communities also met with Cardinal Parolin. Members from interfaith solidarity foundation and humanitarian organizations, including Red Cross and Caritas Lebanon, also had a cardinal meeting. During their meeting, Maronite Archbishop Paul Abdel Sater of Beirut, told the cardinal: "The Middle East is constantly emptying from the Christian presence, especially from its youth."  Archbishop Sater also appealed to the Vatican "to do your best to thwart this ugly and harmful scheme."