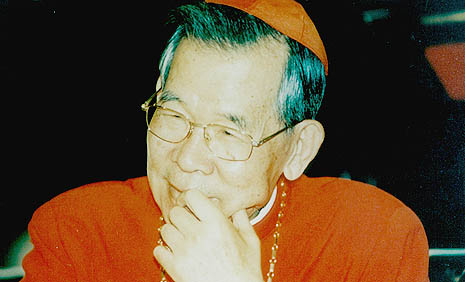 The Korean Church has finalized plans for events on February 16 marking the second death anniversary of the country’s first cardinal, Stephen Kim Sou-hwan. The highly-respected cardinal, who died on February 16, 2009 aged 86, was an iconic figure in Korea’s bloody path towards democracy during the 1970’s and 80’s, and spearheaded church efforts against military dictatorship. Seoul archdiocese says it will hold Masses at Myeongdong Cathedral and at his tomb in Yongin Catholic Park Cemetery. Cardinal Nicholas Cheong Jin-suk of Seoul and Auxiliary Bishop Andrew Yeom Soo-jung will preside at the Masses respectively. The archdiocese’s social arm, the One-body One-spirit Movement (OBOS), which was established by Cardinal Kim in 1989, will also hold an organ donation drive in the Myeongdong Cathedral compound. In addition to signing up potential organ donors OBOS will also be seeking hemopoietic stem cell donations and raising money to help children terminally ill children and patients waiting for organ transplants. OBOS said the number of organ donation pledges since the late cardinal donated his corneas has surged in the past two years. In 2009, 34,079 people promised to donate their organs which almost matched the 34,432 pledges made over the past 20 years. Last year there were 36,569 pledges. Also, Babo Nanum (Fools Fund), the archdiocese’s fund-raising agency, established in memory of Cardinal Kim, is now receiving funding applications from institutions and individuals working for the needy. Meanwhile, IMD, a Catholic drama company, is to perform, “Cardinal, a Fool,” a play depicting the life of Cardinal Kim at the Catholic Youth Center in Seoul until May 30. Daejeon diocese is to stage a photo exhibition depicting the life of the cardinal February 15-27. Related report Organ donation pledges surge after late cardinal´s example KO13168.1640