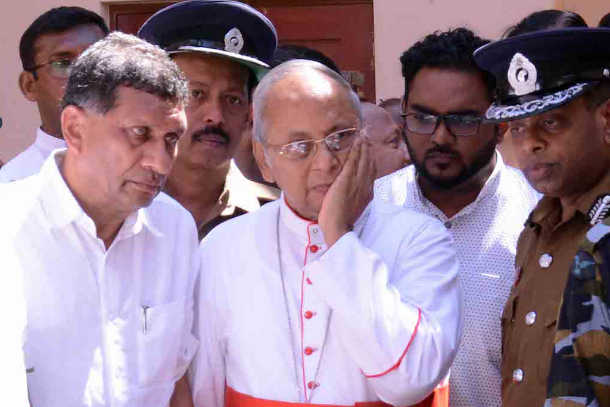 Cardinal Malcolm Ranjith (center) visits St. Sebastian's Church in Negombo after the Easter Sunday attack that killed 91 people on April 21. He called for a strong and impartial inquiry to find those responsible for eight bombings. (ucanews.com photo)

By ucanews.com reporters, Colombo and Negombo

Cardinal Malcolm Ranjith has condemned the Easter Sunday bomb attacks on churches and hotels in Sri Lanka as the death toll rose to 290.

He also called for a strong and impartial inquiry to find those responsible for the deadliest violence in the country since its 26-year civil war ended in 2009.

"I condemn to the utmost of my capacity this act that has caused so much death and suffering to the people," said Cardinal Ranjith, the archbishop of Colombo. "I appeal to the doctors to help those in dire needs by sacrificing your Sunday leave."

He also appealed to the public to donate blood and urged people to remain calm and not take the law into their hands.

Police said 24 people have been arrested over the attacks, which left more than 500 injured. At least 36 foreigners were among the dead.

Sri Lanka has blamed local jihadist group National Thowheed Jamath (NTJ) for one of Asia's deadliest terrorist attacks in years after confirming seven suicide bombers carried out the Easter Sunday blasts. All the bombers were believed to be Sri Lankan nationals.

Health Minister Rajitha Senaratne pointed the finger of blame at the group at a press conference in Colombo on April 22.

“We do not believe these attacks were carried out by a group of people who were confined to this country. There was an international network without which these attacks could not have succeeded,” Senaratne said.

Not much is known about the NTJ, which has been linked to the vandalizing of Buddhist statues in Sri Lanka.

The government also reportedly said it had been warned three times in recent weeks that a possible attack during the holy holiday was imminent.

Three churches in Negombo, Batticaloa and Colombo's Kochchikade district were targeted during Easter services and blasts also rocked the Shangri-La, Kingsbury and Cinnamon Grand hotels in the capital.

Several bombs exploded at St. Sebastian’s Church in Negombo, St. Anthony's Shrine in Kochchikade and The Zion Church in Batticaloa between 8.45 a.m. and 9.30 a.m. The aftermath of the suicide bombing at St. Sebastian’s Church. (ucanews.com photo)

The government imposed a police curfew on Sunday evening and blocked access to social media including Facebook, WhatsApp and Viber. It declared holidays for all schools on April 22 and 23.

Parishioner Ranjitha Fernando, who was crying and searching for his relatives among bodies in St. Sebastian’s Church, said CCTV footage showed a suicide bomber carrying a heavy bag enter the church during Mass.

He detonated his device during the last part of the Mass attended by 800 faithful, killing 91 and injuring 104. Bodies and human flesh were scattered around pews and walls, while the roof of the church was destroyed.

"It is the responsibility of the government to find the perpetrators and give the due punishment. Are we going back to the dark ages again?" Fernando asked.

Pradeep Kumar, a Hindu who lives near the shrine, said he heard an explosion from the premises around 8.45 a.m.

“I heard the sound and quickly ran to the church. Then I saw many people were killed and injured. I helped to transport injured people to hospitals. We brought blankets from nearby homes and covered the dead,” said Kumar.

A Hindu woman who gave her name as Ranjani showed photographs on her mobile phone of her sister and brother-in-law who had attended Easter Mass at the shrine.

"My sister, 35, was married to a Catholic. She works in a house in Colombo and her husband, 45, works in a shop. They have two kids and they are with us. Once we heard about this incident we went to hospitals, mortuaries and now we have come here to find them," she told ucanews.com.

Prime Minister Ranil Wickremesinghe acknowledged that adequate precautions had not been taken despite prior information about possible attacks.

According to the 2012 census, out of Sri Lanka's population of about 22 million, 70 percent are Buddhist, 12.6 percent Hindu, 9.7 percent Muslim and 7.6 percent Christian.

Watch this video for more on the attack against St. Sebastian’s Church: