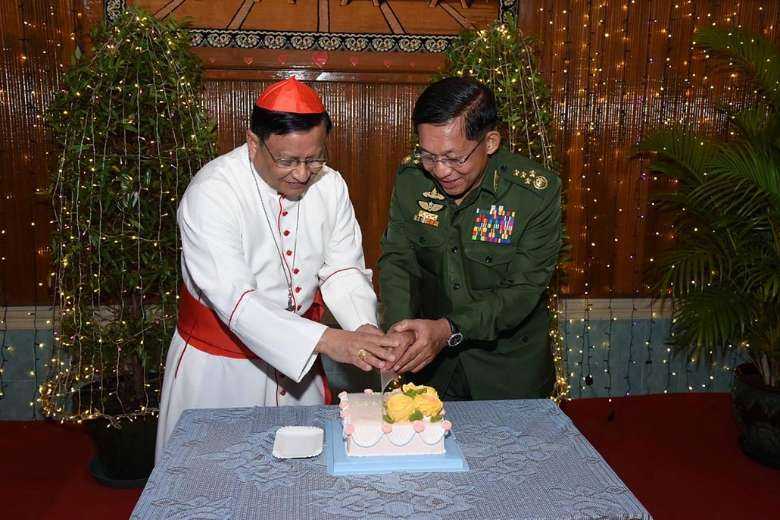 The archbishop of Yangon and the general cut a Christmas cake together and the military chief also donated US$11,000 to the cardinal for church funds.

Cardinal Bo said in his short message that peace and peacemaking represent the core message of Christmas.

“I encourage and request all people from all walks of life to make extraordinary efforts to bring peace, unity and development to the country through forgiveness, mutual respect, creating opportunities for the younger generation, sincere dialogue and reconciliation with all our people,” he said.

The cardinal also conveyed the message of Pope Francis, who visited Myanmar in 2017, that he is deeply saddened by the current situation in the country and repeated his appeal to work hard for peace, development and joy.

Many Catholics are being murdered across Myanmar, yet the cardinal is associating with the murderer and neglecting the pain of our brothers

The meeting between the Catholic leader, who advocates for peace and human rights, and Min Aung Hlaing came amid the military’s relentless assault on civilians including air strikes and shelling in Karen, Chin, Kayah and Kachin states where Christians form the majority.

The Independent Catholics for Justice in Myanmar condemned the meeting, saying it ignored the suffering of the people who have been oppressed and killed and the bombing of churches.

“The meeting is not representing the whole Catholic community in the country as it is against the will of all Catholics,” the group said in a statement.

Catholics including clergy have taken to social media to express their anger, shock and dismay at the meeting.

“Many Catholics are being murdered across Myanmar, yet the cardinal is associating with the murderer and neglecting the pain of our brothers,” one Catholic poster said.

“What a disrespectful manner. He doesn’t represent the Burmese Catholic community. Shame on you, Charles Bo,” said another.

A Catholic priest said on his Facebook page that he strongly condemned the meeting as a cleric.

“It’s a sorrowful Christmas this year as a result of the meeting ... the military chief is attempting to use religion for political gains,” he said.

The priest added that the Church in Myanmar doesn’t rely on Cardinal Bo alone and the cardinal does not represent the nation’s Catholic community.

Priests and pastors have been arrested while many unarmed civilians, including Christians, have been killed

A handful of churches belonging to Catholic, Baptist and other denominations in the Christian strongholds of Chin state in the west and Kayah state in the east have been bombed and destroyed in deliberate attacks by junta forces.

Several parishes in Loikaw Diocese, which covers Kayah state, Pekhon Diocese in southern Shan state and Hakha and Kalay dioceses, which cover Chin state, have been abandoned due to intensifying fighting over the past six months.

The four dioceses of Hakha, Kalay, Loikaw and Pekhon out of the 16 dioceses in the conflict-torn nation have been badly hit following February's military coup that triggered peaceful demonstrations and a growing resistance by newly emerged militia groups.

The rising conflict, particularly in predominantly Christian regions inhabited by the Kayah, Chin and Kachin, resulted in churches being shelled and raided. Priests and pastors have been arrested while many unarmed civilians, including Christians, have been killed.

PAUL LIM
What do one expets from the institutionnel Church? It always wants to protect its selfish interests i.e. among others its continued existence in Myanmar as elsewhere. it loses now crédibility perhaps membership in Myanmar.
Reply

FR. NBAN LA
What a disgraced Cardinal! No wonder the church in Myanmar is so corrupt to the core. What a Brainless, Mindless stupid Cardinal. Not deserve to be the Cardinal. Pope Francis must excommunicate him and strip his title and Crucify hi m in hell together with the mother fucker Main Aung Hlaing
Reply