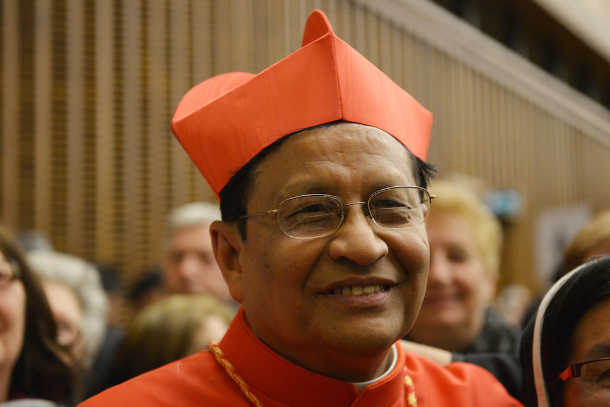 Cardinal Charles Bo’s concerns echo not just those of his fellow Asians but also those of people across the globe at a time when the stark overreliance of most countries on China has become apparent. (Photo: Tiziana Fabi/AFP)

In launching his unprecedented attack on China over its culpability for Covid-19, Myanmar’s Cardinal Charles Maung Bo appears to be on a collision course with both the Vatican’s Secretariat of State and Myanmar’s government and military.

But the archbishop of Yangon has form in standing up to China and other vested interests as well as for oppressed people — stances that have cast him as Asia’s most fascinating senior cleric. It’s a role that he has consolidated over the past 18 months after succeeding his close friend Cardinal Oswald Gracias as president of the Federation of Asian Bishops’ Conferences.

It is safe to use that overused term “unprecedented” in describing Cardinal Bo’s comments. This is true for both the scope and vehemence of his attack on Beijing as he placed the blame for the coronavirus crisis specifically on the ruling Chinese Communist Party (CCP) and demanded reparations from the repressive regime for the whole nightmare.

It’s worth repeating his summary: “In particular, the regime has launched a campaign against religion, resulting in the destruction of thousands of churches and crosses and the incarceration of at least one million Uyghur Muslims in concentration camps … And Hong Kong, once one of Asia’s most open cities, has seen its freedoms, human rights and the rule of law dramatically eroded.

“Through its inhumane and irresponsible handling of the coronavirus, the CCP has proven what many previously thought: that it is a threat to the world. China as a country is a great and ancient civilization that has contributed so much to the world throughout history, but this regime is responsible, through its criminal negligence and repression, for the pandemic sweeping through our streets today.”

No words were minced and no punches pulled. His intent and message were crystal clear, and it is here that lies something of a puzzle.

The savvy Salesian attacked the CCP head on in a way that the Vatican has specifically avoided for decades as it has struggled to find a way to reach some sort of compromise with China’s atheist and avowedly anti-religious leadership in order to mend the rift in the Catholic Church in the country. The Chinese Church is split about 50-50 between the CCP’s “official” church and the so-called underground church now suffering its worst wave of persecution since the days of Mao Zedong.

To drive the knife in further, Cardinal Bo namechecked the Muslim Uyghur ethnic minority, more than a million of whom have been incarcerated in “re-education camps” in Xinjiang as Beijing carries out a program of cultural desecration that can only be described as evil. Like the “three Ts” of Tibet, Taiwan and Tiananmen, this is simply a no-go area for the CCP. The cardinal’s comments will have made many senior Chinese officials apoplectic.

The Vatican’s reticence to criticize Beijing has become even more pronounced under Pope Francis, who vowed both to make Asia a key focus of his papacy and to achieve what his predecessors failed to do — a deal with Beijing on the appointment of bishops.

No matter what one thinks of a deal that has divided opinion among Catholics and clergy, the pope has done both. Indeed, he was planning his third trip to Asia in four years until the coronavirus forced him to cancel September visits to Indonesia, Timor-Leste and Papua New Guinea.

Cardinal Bo has hosted the pontiff twice, as archbishop of Yangon when Francis made his historic visit to Myanmar in November 2017 — the first by any pope — and last year when the Holy Father traveled to Thailand and Japan.

It is worth noting that Cardinal Bo’s critique of the CCP is similar in style and tone to comments made by a fellow Salesian, Hong Kong Cardinal Joseph Zen Ze-kiun, who has maintained consistent criticism of the Vatican’s deal, claiming that Secretary of State Pietro Parolin is in effect tricking Pope Francis into underestimating the regime in Beijing.

Yet unlike 88-year-old Cardinal Zen, casually written off by his many critics as recalcitrant and largely irrelevant due to his advancing age and fall from grace in Rome where he has been sidelined almost completely on China issues, 71-year-old Cardinal Bo is both an appointee of Pope Francis and in favor in the Vatican. In his first few years as a cardinal, he spent plenty of time in the Italian capital and he sits on various Vatican dicasteries.

This raises the question of just how much support Cardinal Bo’s statement had at the highest level in Rome. It’s hard to imagine that it was not signed off, albeit notably not endorsed by any mention in Vatican News. Is this a signal to Beijing that Rome will now play hard ball as the two-year term of the provisional deal on bishops approaches its September expiry date?

When Cardinal Bo speaks of the challenges facing Myanmar, he is speaking for many countries in the region.

“In my own country, Myanmar, we are extremely vulnerable. Bordering China, where Covid-19 first began, we are a poor nation without the health and social care resources that more developed nations have. Hundreds of thousands of people in Myanmar are displaced by conflict, living in camps in the country or on our borders without adequate sanitation, medicines or care. In such overcrowded camps the social distancing measures implemented by many countries are impossible to apply. The healthcare systems in the most advanced countries in the world are overwhelmed, so imagine the dangers in a poor and conflict-ridden country like Myanmar,” he wrote.

China is in dispute with most countries in the region either over territorial claims in the sea or, as with India, on land and in the economic sphere where many regard it as an economic colonialist. It seems that the Asian bishops are very much behind Cardinal Bo.

The timing of his attack is significant with the Vatican-China deal up for renewal. Due to its role in originating the coronavirus, Beijing has ceded any moral high ground it might have gained in the last few decades.

And at home Cardinal Bo is very much speaking for his fellow countrymen. China and the Chinese — apart from the money they bring — are not popular in Myanmar, where there is concern on the streets about how big an influence China has become in the country.

In many ways, Cardinal Bo’s concerns echo not just those of his fellow Asians but also those of people across the globe at a time when the stark overreliance of most countries on China has become apparent. And, just maybe, he is saying things that the pope would like to say but simply cannot.