Thailand's large seafood exports are sustained through injustice, he says 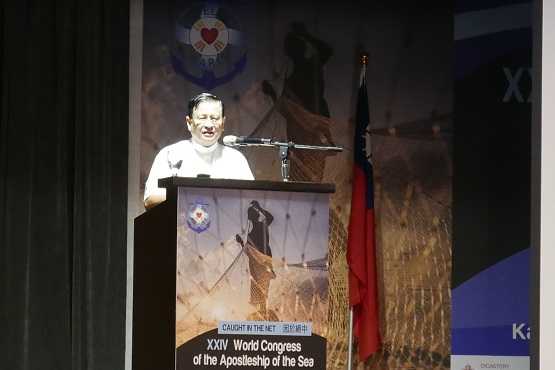 Cardinal Charles Maung Bo of Yangon speaks at the 24th World Congress of the Apostleship of the Sea held in Taiwan. (ucanews.com photo)

The Thai fishing industry's use of slave labor was highlighted by Cardinal Charles Maung Bo of Yangon during the 24th World Congress of the Apostleship of the Sea recently held in Taiwan.

The Myanmar prelate was speaking at the 'Caught in the Net' congress that was held from Oct. 1-7 in Kaohsiung, a harbor city in southern Taiwan.

During his speech, Cardinal Bo highlighted the challenges relating to human rights abuses at sea.

"Millions (of people) are caught in the net of conflicts and displacement. Hundreds are adrift at sea as we gather here," he said.

Cardinal Bo decried the fate of many young people from Myanmar used as slaves on fishing vessels, especially those working out of Thailand.

Thailand, he said, is the third largest exporter of seafood in the world. It is an industry "sustained through the injustice done to thousands of trafficked Myanmar youth," who work as sea slaves.

"A globalized world has made them un-seeable and a market economy has muted their cry of anguish," Cardinal Bo said.

He said 'Sea Sunday,' which is celebrated on the second Sunday in July, should be a mandatory worldwide celebration across the Catholic Church.

Pope Francis sent a message to the congress, urging delegates to be the "Church that harbors the mystery of God that can attract people to him."

Concluding the congress, Father Bruno Ciceri of the Apostleship of the Sea highlighted three priorities for the group's work. The first was ensuring port chaplains visit fishing ports. The second was to raise awareness amongst consumers of human rights abuses in the seafood supply chain. The third was to respond to Cardinal Bo's 'SOS' to establish an Apostleship of the Sea ship-visiting team in Myanmar.

The World Congress of the Apostleship of the Sea takes place every five years. At each congress, ways are explored on how the Catholic Church can further enhance its support for fishermen and their communities.

The Asia Pacific region has the highest number of fishermen and sailors in the world.