Cardinal appeals for peace as violence escalates in Sri Lanka 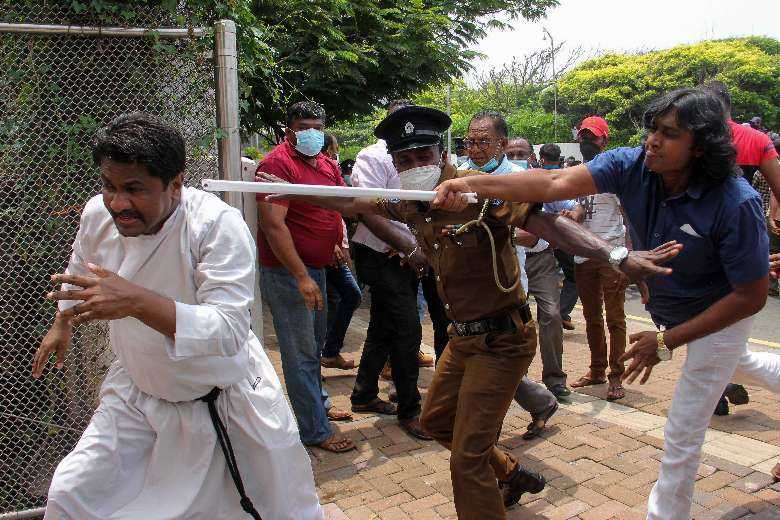 Sri Lankan Cardinal Malcolm Ranjith has appealed for peace as clashes broke out in the island nation after the prime minister quit amid a worsening economic crisis.

“We urge the people to respond peacefully on our religious principles and without resorting to violence,” said Cardinal Ranjith. “We must act non-violently and not attack people.”

The media reported that a ruling party legislator shot dead an anti-government protester and then took his own life during a confrontation outside the capital Colombo on May 9.

“Amarakeerthi Athukorala opened fire and critically wounded two people blocking his car in the town of Nittambuwa, police said, adding that one of the victims died of his injuries,” reported Indian daily The Hindu.

Prime Minister Mahinda Rajapaksa announced his resignation on May 9 but protesters persisted with the demand that his elder brother, President Gotabaya Rajapaksa, must also quit immediately.

Within hours, the ancestral house of the Rajapaksa family in the southern city of Hambantota was set on fire by the protesters. They also set on fire Mahinda’s house in Kurunegala and destroyed the D.A. Rajapaksa Memorial — constructed in memory of Mahinda and Gotabaya’s father — in Hambantota.

“We strongly condemn the barbaric acts, which are totally unacceptable in a civilized and democratic country"

Residences of several ministers and parliamentarians of Sri Lanka’s ruling People’s Front were also attacked while the houses of at least two mayors were set on fire, reported Reuters quoting police sources.

The protesters want the president to quit to makeway for a unity government comprising all political parties to try and find a way out of the country’s economic crisis.

But even as clashes broke out in Colombo, supporters of the ruling party attacked peaceful protesters opposite the presidential secretariat. They pulled down their tents and set them on fire. Similar mobs were reported to be chasing away ordinary people joining the protests in many cities and towns.

“We strongly condemn the barbaric acts, which are totally unacceptable in a civilized and democratic country," said Cardinal Ranjith while observing that pro-government mobs were being transported in buses from various parts of Sri Lanka to attack peaceful protesters.

“We express our opposition to the former prime minister," said Cardinal Ranjith even as pro-government supporters gathered in the prime minister's office in Colombo and engaged in chants asking him not to resign.

The European Union, United Nations and diplomats of other counties condemned the attacks on peaceful protesters and urged the government to conduct an immediate investigation.

Buddhist monk Ven. Omalpe Sobhitha Thera said Mahinda Rajapaksa must take responsibility for the attacks. "The prime minister brought the mob of people to his house and fed them," he claimed.

Ven. Sobhitha Thera said the rulers were trying to keep power by threatening ordinary citizens. “We are not going to let you carry out a rule of terror in the country,” he added.

A nationwide curfew will remain in force until May 11 morning on top of the state of emergency that was declared last week in the face of the escalating protests.

Sri Lankans have been taking to the streets in largely peaceful protests and demanding that the Rajapaksa brothers step down since March.

The country's external debt is estimated to be around US$51 billion and the government is borrowing heavily from China. It has also banned many imports to halt outflows of foreign currency.

The financial crisis has led to shortages of fuel, food and medicines among other essentials, resulting in repeated blackouts and increasing hardships for the island’s population.

ILIYASU BIU MOHAMMED
So sad indeed as I remember being a PhD student at the University of Colombo from 2014-2018. It was great. Am praying for God's intervention.
Reply