Pope Francis celebrates a Holy Mass for the imposition of the Pallium upon the new Metropolitan Archbishops, during the Solemnity of Saints Peter and Paul apostles, in St. Peter's Basilica at the Vatican, on June 29, 2020. (Photo: Angelo Carconi  / POOL / AFP)

Archbishop Terrence Prendergast of Ottawa-Cornwall is preparing to retire, but first he is planning a liturgy where he will receive the pallium. Again.

As the new archbishop of Ottawa, he received one of the woolen bands from now-retired Pope Benedict XVI on the feast of Sts. Peter and Paul, June 29, 2007.

If an archbishop moves from one archdiocese to another, he gets a new pallium. But Archbishop Prendergast, 76, hasn't moved. However, in early May, his archdiocese grew and changed names when the former Diocese of Cornwall was joined to it.

The change merits a new pallium.

"The nuncio and I have been considering dates for him to confer it on me as my retirement is on the horizon," the archbishop told Catholic News Service June 24.

He and the 53 other archbishops who will receive palliums this year were not present for the blessing at the Vatican as COVID-19 travel restrictions are still in place.

The pallium is a woolen band symbolizing unity with the pope and authority over a portion of the Catholic flock. An archbishop wears it over his shoulders, reminding him and others that he is called to gently carry his sheep.

Precisely to emphasize that relationship with the flock, Pope Francis decided in 2015 that while the new archbishops would join him for the Mass on the feast of Sts. Peter and Paul for the blessing of the palliums, the woolen bands would be placed on their shoulders in their home archdioceses.

But the lack of archbishops was not the only unusual aspect of Pope Francis' pallium Mass this year. The new dean of the College of Cardinals, Cardinal Giovanni Battista Re, also received one.

An exception to the rule of palliums going to metropolitan archbishops is the one given to the dean. The last time there was a new dean was in 2005, when Cardinal Angelo Sodano was elected to the role; he received his pallium from Pope Benedict. 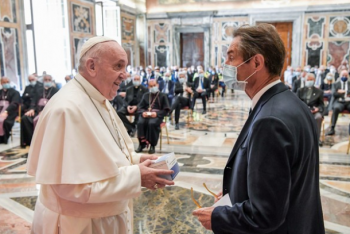 Cardinal Joseph Ratzinger -- the future Pope Benedict -- had been elected dean of the College of Cardinals Nov. 27, 2002. The dean also is titular bishop of the Diocese of Ostia, which is on the sea west of Rome.

The day before he formally was installed as the titular bishop March 16, 2003, then-Cardinal Ratzinger received a pallium from Pope John Paul, restoring an ancient tradition.

Ostia is one of seven suburbicarian dioceses on the outskirts of Rome. Initially, those seven bishops were among the closest advisers of the popes and since 1059 they have been among the group of prelates who elect the popes.

According to tradition, the pallium goes back to the fourth century when Pope Marcus conferred it upon the bishop of Ostia as a symbol of his special role in consecrating a new pope.