As G20 summit host, he hopes to broker peace by inviting Vladimir Putin to the gathering in Bali in November 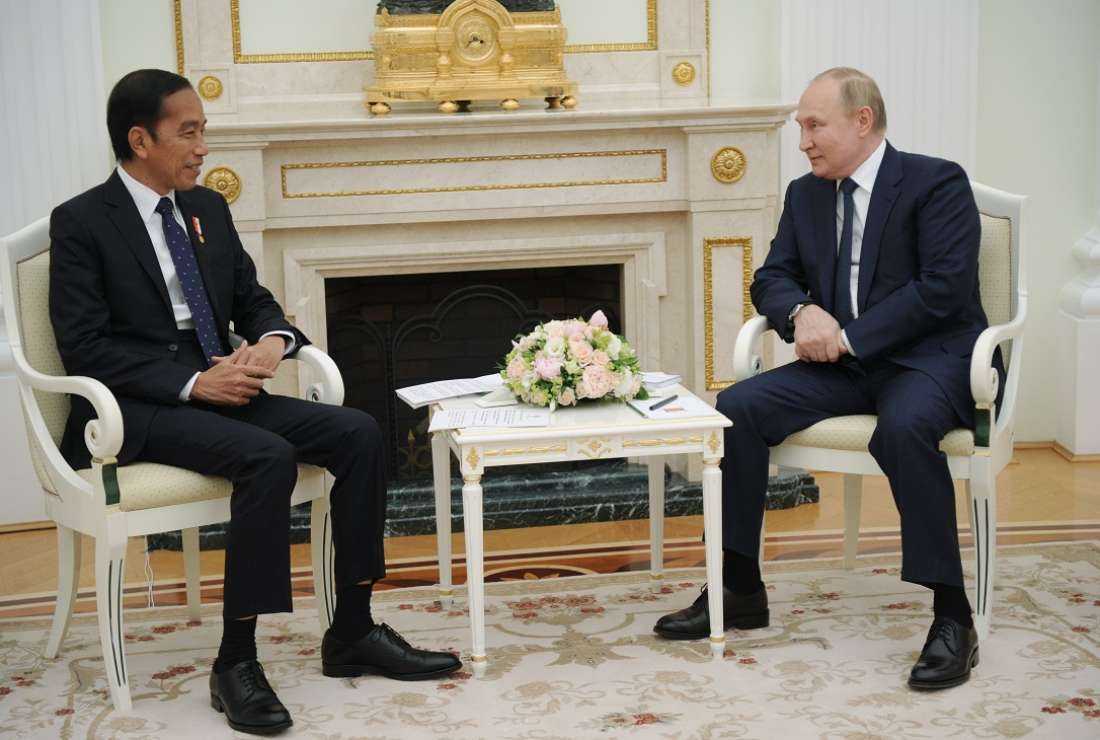 Indonesian President Joko Widodo concluded his European trip by urging the Ukrainian and Russian leaders to engage in a dialogue to end the war.

He deserves respect and support from the rest of the world for risking his life and that of First Lady Iriana Jokowi. On the day they arrived in Kyiv on June 29, visiting a site devastated by earlier attacks, Russian missiles hit parts of Ukraine.

The world is watching and perhaps questioning whether his meetings with Ukrainian President Volodymyr Zelenskiy and Russian President Vladimir Putin will bear fruit.

Even G7 leaders and people at home doubted him.

But Widodo believes the war can end, sooner rather than later. For him, economic sanctions or repeated condemnation of the Russian invasion only add salt to Moscow's wounds. The war has killed so many people and further worsened the global economy still reeling from the pandemic.

Widodo dared to part ways with European and NATO leaders, who condemned Putin, and imposed sanctions on Russia, while Ukraine’s Zelenskiy appears to be the victim that needs world help.

"Before meeting with Zelenskiy and Putin, he urged world leaders during the G7 summit in Germany early this week to think of the war’s massive impact on poor countries"

For Widodo, Ukraine and Russia are important not only to Indonesia but to the world. The war has caused soaring oil prices and a food crisis in many parts of the world, including Indonesia.

The conflict in Ukraine has killed at least 4,200 people since it started in February, according to the UN Human Rights Office of the High Commissioner. More than 5.2 million Ukrainians have sought refuge in European countries and further afield.

Widodo knows that he cannot end the war without support from European leaders.

It’s an interesting sequence. Before meeting with Zelenskiy and Putin, he urged world leaders during the G7 summit in Germany early this week to think of the war’s massive impact on poor countries. He urged them to ensure that Ukraine’s grain and Russia’s fertilizer are shipped to countries that need them.

About 10 percent of the global wheat supply comes from Ukraine, but it stopped when the war started in February, causing food insecurity in many African and Asian nations, including Indonesia.

The World Food Program says that around 276 million people are facing acute food insecurity in the 81 countries where it operates. That number could increase to 323 million people this year due to the Russia-Ukraine conflict.

Widodo has urged European leaders to stop thinking about themselves and find a solution to the food crisis. In other words: stop the embargo on Russian exports because many countries depend on its oil and other commodities. He knows that they are the key that can open the room for dialogue between Moscow and Kyiv.

"The person responsible for the war is Putin. He is the one who started the war. He is also the person who can end it"

Initiating the peace mission — bringing Putin and Zelenskiy together — by inviting the G7 leaders was a good start. But will he succeed?

Let’s start with the premise that it's "no."

The war situation in Ukraine has nothing to do with Indonesia. It involves Russia, Ukraine and NATO members.

Established in the post-World War II era, the organization played an important role during and after the Cold War. Ukraine’s eagerness to join the alliance, which means that it would transform into a powerful nation, was opposed by Moscow. Russia saw it as a threat to its national security, considering that the countries share long borders.

Some experts were pessimistic about Widodo’s bid to end the war. Indonesia has no bargaining power, unlike the US or its allies within NATO who have money, power and weapons.

The problem is that NATO members prefer sanctions as a solution. Unfortunately, Putin responded by firing more missiles at Ukraine. So, there would be no ceasefire without the help of EU leaders. Hence, Widodo would return home empty-handed. His mission would be a failure.

Now, let’s see why his mission could be a success. As we all know, the person responsible for the war is Putin. He is the one who started the war. He is also the person who can end it.

But the problem is that since the invasion on Feb. 24, or even back in 2014 when Russia annexed the Crimea, Putin has been considered a pariah, an outcast. Many world leaders only visited Ukraine to support Zelenskiy, while Putin will forever be avoided.

That’s the opportunity for Widodo. Using his position as the chair of the G20 — a group of 20 nations that manage 85 percent of the global economy — he invited Putin to attend the group’s summit in Bali in November.

There have been some positive signs. A few days before his visit, the Russian leader said that he highly respects President Widodo and promised to attend the summit.

He was even reported saying that it would not be a problem for him if Zelenskiy also attended.

Widodo's visit may not bear fruit immediately. But it's not impossible for the two leaders to accept his request to meet and end the conflict. But it would certainly be awkward for European leaders.

Indonesia and Russia have had very good relations over the past several decades. Its free and active non-aligned foreign policy guarantees that Indonesia stands in the middle of conflicting governments with sincerity, not for its own sake but for the good of all humankind.

Indonesia’s first president Sukarno visited the Soviet Union more than 60 years ago. His request to build a mosque known as the Blue Mosque was accepted and it still stands today.

Widodo’s visit could create momentum for Putin to get out of the mess he has created. He would not want to embarrass himself by stopping the war without a reason. Hopefully, Widodo’s request will provide that reason.