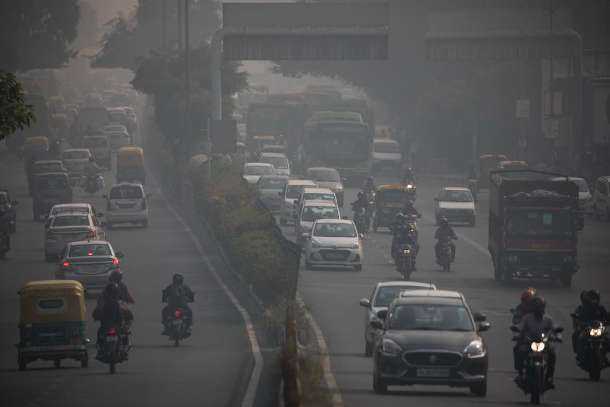 Commuters make their way along a busy road under heavy smog in New Delhi on Nov. 7. (Photo: AFP)

When nothing moves, wait for miracles. The health situation in New Delhi has turned into a serious crisis thanks to the twin effects of the spreading coronavirus pandemic and worsening air pollution. Perhaps only a miracle can turn things around.

Delhi's air quality remains in the "very poor" category, mostly due to stubble burning in the neighboring states of Haryana, Punjab and Rajasthan, government agencies reported by the end of October when the winter season begins in the region.

On Oct. 30, the capital registered its highest single-day spike in Covid-19 infections with 5,891 cases. Since October, the national capital has witnessed an average increase of some 5,000 cases each day.

Notably, Delhi's Covid-19 figures show a reverse trend to the national graph, which shows a dramatic drop. From the peak of reporting more than 90,000 cases each day, national daily cases have come down to less than 50,000 in early November.

Besides Delhi, the southern state of Kerala has also reported an increase of over 8,000 cases each day since October end. The number of cases began to increase after Kerala's popular Onam festival, when people thronged markets and shops disregarding Covid-19 restrictions and protocols.

New Delhi and other northern Indian states fear similar or worse increases in their areas following the popular Hindu festivals of Durga puja and Dusherra, which passed in the last week of October.

The biggest festival Diwali, the festival of lights when each family engages in lighting firecrackers, falls on Nov. 14. The days after the festival nearly choke New Delhi with smoke, deteriorating the already polluted air quality.

Sikhs celebrate the birth anniversary of their founder Guru Nanak on Nov. 24, when crowds engage processions with dancing and singing.

"The situation could be worse in underdeveloped Bihar, which is undergoing provincial elections. There is administrative chaos as electoral politics often surpasses health matters," said commentator Vidyarthi Kumar.

Appreciating the gravity of the crisis, several provincial governments, including the local authorities in capital Delhi, have banned firecrackers. Some states like Haryana and Madhya Pradesh have banned imported firecrackers, mainly cheap products from China.

Delhi had experienced a major improvement in air quality when Prime Minister Modi imposed a coronavirus-induced lockdown on March 25. But by October, things bounced back to earlier levels.

"Delhi's poor air quality is also due to vehicular traffic, industries emitting gas and stubble burning. Corona is still a crisis, yet people are coming out in large numbers in Delhi," said office worker Samik Paul Chowdhury in East Delhi.

Traffic congestion and crowds in the shopping areas and markets have become normal "as if the pandemic was something of the past," he said.

The federal government under Modi says it is "sensitive" to the deteriorating air quality.

The federal government has established a new commission to better coordinate, research, identify and resolve air quality problems in the national capital region and adjoining areas.

However, it will remain to be seen how much such bureaucratic moves will help the situation. Earlier such attempts and studies did not yield results.

Steps earlier recommended included phasing out polluting coal-fired plants, introducing cleaner fuel and seeking a ban on pet-coke and the management of burning paddy stubble. But actions on the ground were seldom.

Stubble burning in neighboring states remains a politically sensitive issue as government restrictions on their traditional farming method will make politicians unpopular in these peasant-dominated states.

The pro-Hindu Bharatiya Janata Party governs Haryana and Uttar Pradesh states, while the rival Congress party rules Punjab and Rajasthan states. But all governments have failed to stop the practice.

Farmers burn the stubble left after harvesting the paddy crop to prepare the soil to sow wheat in the next farm season. It helps control pest and weeds and saves them the cost of processing the waste, they argue.

"We need more concrete and result-oriented steps. But the Modi government is faltering in handling one challenge from another. Poor air quality and insufficient amounts of silica in humans reduce immune responses towards viruses," said Congress leader Ilyas Qureshi.