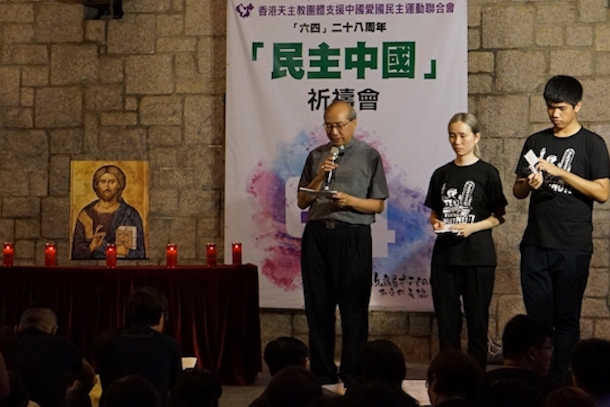 Auxiliary Bishop Joseph Ha Chi-shing is clearly unperturbed by reports that he will be passed over as bishop of Hong Kong’s eponymous diocese and has continued his sharp criticism of the Chinese territory's government.

Instead, Father Peter Choy Wai-man, one of Hong Kong’s four vicars general and a man whose sympathies are reported to lie with Beijing, has been named in a raft of breathless media predictions as the Vatican’s choice.

The position of leading Hong Kong’s 500,000 or so Catholics has been effectively vacant since the untimely death of Bishop Michael Yeung on Jan. 2, 2019, after less than three years in the job. His predecessor Cardinal John Tong Hon was brought out of retirement to fill the gap until Pope Francis could settle on a replacement.

The reason was self-evident. Yeung’s death was unexpected, even though rumors about his health had swirled around the city ahead of his elevation to bishop. Crucially, his death came barely three months after the Vatican inked its September 2018 provisional deal with Beijing on the appointment of bishops.

Tong had been the very safe pair of hands who had been instrumental in prosecuting the Vatican’s case to Catholics in Hong Kong and mainland China who were understandably wary about the ruling Chinese Communist Party.

As the remaining auxiliary, Ha — very popular with his parishioners —  was the next in line. But the China doves in the Vatican had reason to be wary due to his closeness to the aging but apparently ageless Cardinal Joseph Zen Ze-kiun, 88, an extremely vocal critic of the Vatican-China deal as well as a critic of his predecessor Tong.

Like Zen, a veteran pro-democracy/anti-Beijing protester in street marches stretching back decades, Ha has been a mainstay of the Hong Kong protest movement over the past 11 months.

“I was born and raised here in Hong Kong; here I have my family and the people I love. All we want is to live in freedom, to have guarantees for our lives, to have the freedom to which everyone is entitled and no longer live in fear. Are we asking too much? Don’t we really deserve this? No! It shouldn’t be like this,” Ha wrote in an opinion piece last year.

Bishop Ha came late to the priesthood after a career in banking, starting his religious studies in 1984 in Taiwan ahead of his 1991 ordination. He was appointed one of three auxiliary bishops of Hong Kong by Pope Francis along with Yeung and Stephen Lee Bun-sang in July 2014. They were consecrated the following month; Cardinal Tong, during his first stint as bishop of Hong Kong, was their principal consecrator.

Lee was appointed bishop of Macau in January 2016, while Yeung became first coadjutor and then bishop of Hong Kong in 2016.

Bishop Ha’s activism in the largely youth-led protests has made him something of a local hero and the de-facto moral voice of the movement.

“Dear all, I hope to convey an urgent message about the situation of Chinese University of Hong Kong. I urge the police to keep restraint. Dear students, please put your safety as the top priority. With all the citizens in Hong Kong, I feel worried and grieved for what is happening tonight. Life is the most precious gift. Nothing is more precious than life,” he said in a November 2019 video message.

The protesters are already being tested once more by an increasingly authoritarian Hong Kong government that now clearly has its strings pulled by Beijing.

"If the fundamental problem is not solved, people will just continue to come out and protest," Bishop Ha said in a video message on May 15, adding that the administration has ignored the demand to appoint a committee to probe police violence against protesters.

There have been some oblique signs that the Vatican’s attitude towards the People’s Republic of China may be shifting in the outspoken comments of Myanmar’s Cardinal Charles Maung Bo last month.

The Vatican will now be deep in talks with Beijing about either an extension of the provisional deal’s original two-year term that ends in September or the formalization of a more permanent arrangement. With the Covid-19 crisis putting the kybosh on international travel, some sort of extension would seem the most likely result for now.

Amid the flurry of reports earlier this year that Ha would be passed over as Hong Kong’s bishop, it was predicted that an announcement was imminent. As that did not come to pass, it would also seem that the Holy See and Cardinal Tong are content with the current arrangements.

Ha certainly has nothing to lose and is displaying the courage of his convictions in pressing the Hong Kong government for transparency and fairness.

In any other country on earth, he would seem to be just the type of spirited priest that Pope Francis would want as a bishop. But as they say, nothing is over until it’s over.