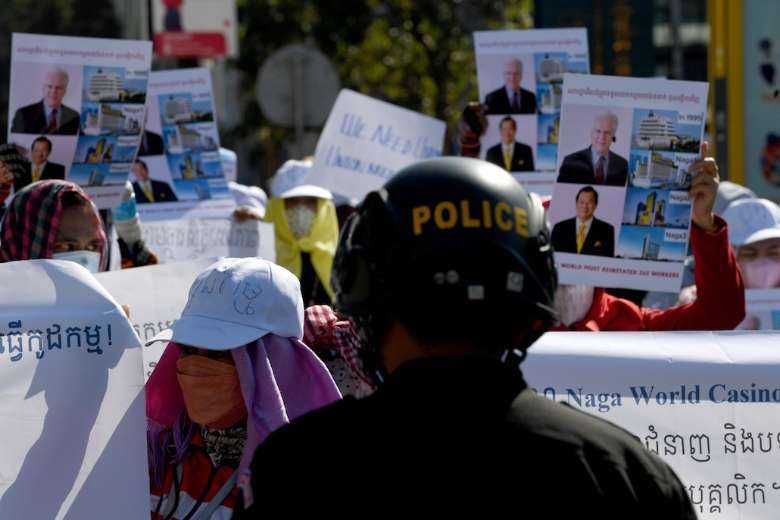 A police officer blocks workers from the NagaWorld casino holding placards during a protest outside the National Assembly in Phnom Penh on Jan. 4 to demand the reinstatement of colleagues who were laid off last year. (Photo: AFP)

Striking casino workers have petitioned the Cambodian government demanding an end to the violence inflicted on them outside the NagaWorld complex in Phnom Penh where female protesters have persistently complained of sexual harassment and manhandling.

The petitions were lodged with the Interior Ministry and the Women’s Affairs Ministry amid a brief lull in the protests, which have been suspended to enable negotiations.

“We are human rights activists and we cannot accept it,” Hun Vannak said regarding violence perpetrated by security personnel outside the casino. “And we don’t want those who do wrong to get away.”

He told the Voice of Democracy that the Interior Minister Sar Kheng — who has called for calm and patience — had to ensure that officers under his jurisdiction would halt the violence.

Striking workers want 365 union leaders and delegates reinstated after they were let go in April last year, with NagaWorld casino management claiming they were laid off to reduce costs amid the Covid-19 pandemic.

However, many of those who were laid off have not accepted severance packages under a mutual separation plan. They claim the company’s offer is inadequate.

At least eight people have been charged with inciting riots and causing serious social unrest. They were recently released from detention in what was seen as a breakthrough in the near four-month-long strike

Previous efforts between unions, NagaWorld management and the government to resolve the dispute — widely seen as a human rights issue with the United States and United Nations expressing concern — have faltered.

Unions have complained that NagaWorld has refused to consider the reinstatement of sacked workers. Many are women, prompting a Phnom Penh City Hall spokesperson to claim that many of them were pretending to be victims to attract pity.

The spokesperson, Met Measpheakdey, also posted on Facebook that strikers were actually the ones who were violent to authorities and added that female strikers had resorted “to yelling and being very inappropriate, which is not suitable as Khmer women.”

At least eight people have been charged with inciting riots and causing serious social unrest. They were recently released from detention in what was seen as a breakthrough in the near four-month-long strike.

The eight also requested bail, asked for legal representation and promised not to protest in a way that would “affect public order and national security.” Others have been repeatedly rounded up and packed into buses before being driven off to holding centers used for Covid-19 quarantines.

NagaWorld casino is owned by Malaysian billionaire Chen Lip Keong, who is worth more than US$6 billion, according to Forbes magazine.

NagaWorld has claimed that the Covid-19 pandemic had resulted in a net loss of $77 million in the first six months of 2021, resulting in the layoffs, which it says were not a means of targeting union members.