The Hun Sen regime's persecution of activists, trade union activists, the opposition and others must end, CIVICUS says 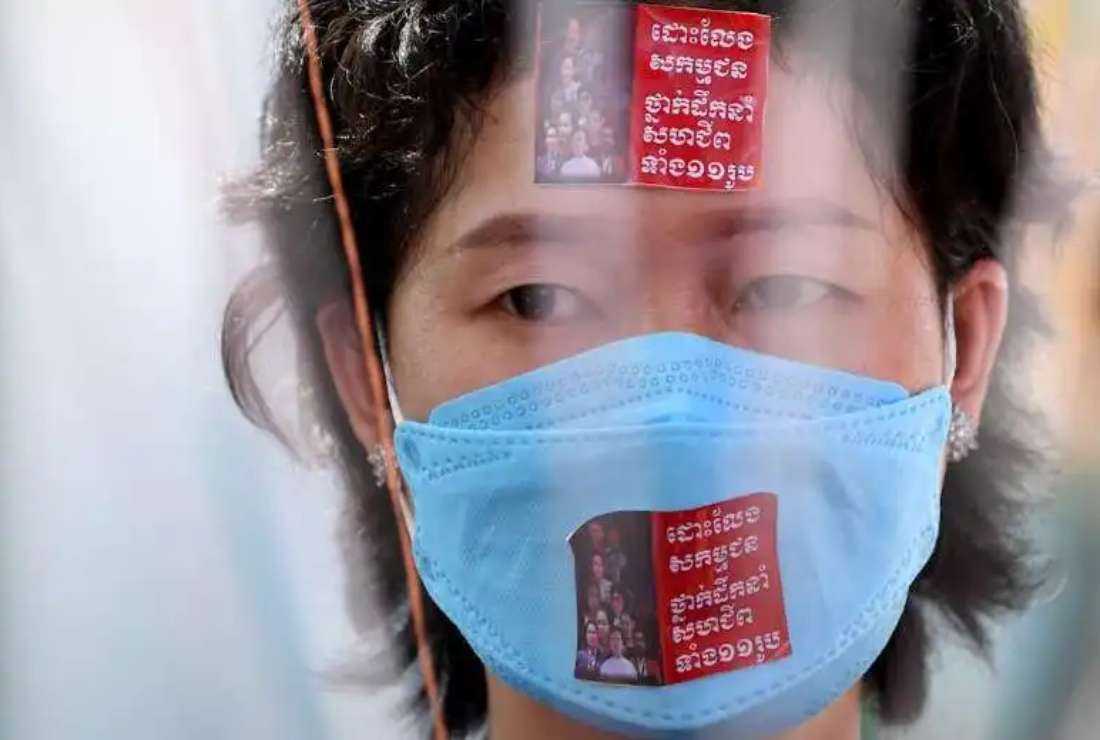 A former employee of the NagaWorld casino prepares to release balloons to mark International Women's Day and to demand the release of jailed trade unionists in front of Prey Sar prison in Phnom Penh on March 8. (Photo: AFP)

Global rights watchdog CIVICUS has blasted the long-ruling regime of Prime Minister Hun Sen in Cambodia for ongoing violation of basic rights that continues to shrink the state of civic freedoms in the country.

In the latest report released on Sept. 20, CIVICUS has called on Cambodian authorities to halt its persecution of activists, trade union activists, the opposition, and others and end all restrictions on fundamental freedoms.

The group has also called on the international community to put pressure on the Hun Sen regime to respect and protect human rights through the UN Human Rights Council and also directly, ahead of the 2023 national elections.

Following the Human Rights Council’s resolution on Cambodia adopted on Oct. 11, 2021, there have been no tangible human rights improvements on the ground, the report said.

Despite ongoing engagement and reporting by the UN Special Rapporteur on the human rights situation in Cambodia and multiple resolutions at the UN Human Rights Council and recommendations, the Cambodian government has shown no political will to undertake democratic and civic space reforms, it alleged.

Cambodian human rights defenders and activists continue to face repression. Over the past year, vaguely worded charges of ‘incitement’ have been systematically used to harass and convict them in “highly politicized” courts following arbitrary and prolonged detentions and denial of bail.

In May 2022, the Phnom Penh Appeal Court upheld prison terms for four members of the Cambodian Human Rights and Development Association (ADHOC). The activists were previously imprisoned on baseless charges of bribery and were convicted in September 2018.

In 2021, hundreds of workers faced heavy crackdown for participating in a three-month strike in front of NagaWorld casino owned by Malaysian billionaire Chen Lip Keong, over better severance packages for layoffs due to the pandemic.

Dozens of workers were arrested and at least 11 were charged. The authorities have blocked roads and dragged strikers, sometimes violently, onto city buses and driven them to the outskirts of the city, dropping them off. Strikers have been detained at quarantine centers on charges of violating COVID-19 protocols.

Cambodia has also dismantled press freedom as the authorities silenced radio stations and newspapers, purged newsrooms, and prosecuted journalists, effectively crushing independent media. devastated. The Office of the UN High Commissioner for Human Rights reported that journalists in Cambodia are increasingly being subjected to various forms of harassment, pressure, and violence.

The government has abused the restrictive 2015 Law on Associations and Non-Governmental Organizations (LANGO) to target civil society groups.

In January 2022, the Prey Lang Community Network and the Prey Preah Roka Forest Community Network were forcibly prevented from engaging in forest patrols to document and prevent illegal logging for allegedly not being properly “registered.”

“Cambodia is a party to the International Covenant on Civil and Political Rights (ICCPR), which imposes obligations on states to respect and protect civic space. Despite the multiple resolutions at the Human Rights Council the authorities have instead continued to target human rights defenders, union activists, and journalists with impunity,” said Josef Benedict, Asia Pacific researcher for CIVICUS.

Benedict demanded that the government must drop all charges against them immediately as well as take steps to amend or repeal provisions in the Criminal Code that have been used to criminalize dissent.

On March 17, the courts convicted 21 opposition politicians and activists on unsubstantiated charges of ‘incitement,’ ‘inciting military personnel to disobedience' and ‘plotting.'

The courts convicted another 51 opposition politicians and CNRP activists on June 14 of ‘incitement’ and ‘conspiracy.’

The rights group also said Cambodia’s Election Commission dismissed more than 100 members of the opposition Candlelight Party from standing in June 2022 commune elections, which the observers said had various irregularities. It allowed the ruling party to win by a landslide.

Furthermore, Candlelight Party Vice President Son Chhay was charged with defamation after he criticized the commune elections and the Election Commission.

Members of the ‘Friday Women’ movement met with heavy crackdown including being beaten, kicked, dragged, arrested and put under surveillance. The women have been protesting since June 2020 against the jailing of their husbands, brothers, and other relatives who were affiliated with the CNRP.

CIVICUS has called on the international community to press Cambodia to implement the 10 points rights agenda listed by the UN Human Rights Council the Special Rapporteur on Cambodia ahead of the meeting on Oct. 5.